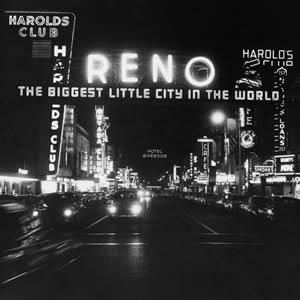 The World Series of Poker wasn’t an original idea. Benny Binion got the idea from two fellow Texans, Tom Moore and his adviser Vic Vickrey, who hosted the Gaming Fraternity Convention at the Holiday Casino in Reno, Nevada in 1968.

The first Gaming Fraternity Convention was a complete flop, and according to James McManus in his book Cowboys Full it was Moore’s wife who came up with the idea of making the reunion poker-themed the following year, in 1969.

Sometimes called the Texas Gamblers Convention, the Texas Gambling Reunion, the Annual Gaming Fraternity Convention, or some other amalgamation of those words, the details of the “Reunion” (as I’ll call it) is starting to be lost to time and a bit blurry – sort of like its name.

The official name engraved on a commemorative platter awarded to Crandell Addington (for winning the most money) reads:

It isn’t exactly a lost part of poker history yet, but the details and specifics about the participants and the festivities are extremely hard to find – something I learned really fast when I started researching this article.

Hopefully I can pull some of these details off the scrap heap with this article, and with the help of some of poker’s old guard who were more than willing to help me out, most notably longtime poker player Carl McKelvey. Without Carl’s help this article would have been a shell of what it is.

The origins of the Reunion

The “Reunion” was conceived as little more than a publicity stunt, and a chance to attract some deep-pocketed gamblers to the Holiday Casino, and according to Carl McKelvey, “He [Moore] guessed with a group like that there would be a good probability someone might want to shoot some craps or pick up a hand of blackjack.”

Unfortunately for Moore, all anyone wanted to do was play poker. And play poker they did, for six or seven days, with 2-7, 5 Card Stud (the only game Benny Binion would play according to McKelvey) and of course No Limit Holdem cash games taking place.

In Moore’s mind the “Reunion” was a flop (poker wasn’t a moneymaker for a casino back in the day) as he comped the players rooms and meals, and he had no intention of hosting another, for multiple reasons as you’ll soon see.

Moore didn’t want to touch it but someone else saw potential in Moore’s “flop.”

Ever the visionary, Benny Binion (a friend of Moore’s from their Texas days, who showed up at the Reunion to support Moore’s casino and probably to see some old friends) saw the potential in the spectacle of the world’s greatest gamblers converging on the same place at the same time.

Despite a supposed offer to purchase the rights to the idea from the Holiday Casino owner (that’s the official story but another version has Binion simply asking Moore if he could host a similar style event in Las Vegas), Moore told him to take the idea and run with it, as he was selling the Holiday Casino anyway and considered the idea a complete flop.

Somewhat sadly, Moore never profited off his novel idea nor does he get any credit for it.

Binion would rename the Reunion as the “World Series of Poker” (a much catchier name) and hosted it at his Downtown Las Vegas casino. The rest, as they say, is history.

The 1970 World Series of Poker was the Texas Gamblers Reunion under a different name, and it wasn’t until 1971 that the WSOP implemented its freezeout style format (a format for which Amarillo Slim Preston took credit for suggesting) that it took the form that we now associate with the WSOP.

The 1971 WSOP was the first official poker tournament.

Doyle Brunson said over 30 players participated in the cash games that ran during the 1970 World Series of poker in his autobiography, and it’s likely that a similar lineup of gamblers were present in Reno the year before.

Carl McKelvey reached out to several people to help me create a list of participants, including Crandell Addington and a pit boss who worked at the Reunion. I also consulted with James McManus’s seminal poker history book Cowboys Full (pages 265 and 266) for more details on the Reunion.

There were undoubtedly others, but this is the list I’ve been able to compile thus far (I will add or delete names if anyone has more information):

Famous poker players at the Reunion:

Famous gamblers at the Reunion:

There are plenty of other stories floating around about the 1969 Gaming Fraternity Convention (such as Johnny Moss also receiving a platter) that I haven’t been able to confirm or deny…so perhaps there will be a follow-up to this column sometime in the future.