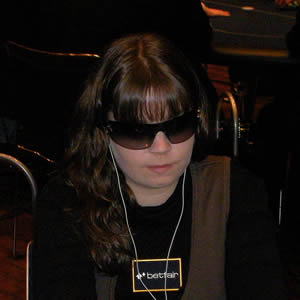 Great Moments In Poker History: Annette_15 And The 2007 WSOPE

Quick, who is the youngest person to win a World Series of Poker bracelet?

The answer is Annette Obrestad.

By all accounts the online poker legend has been tearing up the virtual poker tables since she was 15 years old (hence her online nickname Annette_15) but she really left her mark on the game when she won the inaugural World Series of Poker Europe Main Event held in London back in 2007, and doing so at the tender age of 18 – Annette turned 19 the following day.

But to truly understand Obrestad’s WSOPE victory you have to first understand the legend of Annette_15.

The legend of Annette_15

There are a number of tales about Annette’s online poker exploits, and it’s impossible to tell if any are false or perhaps embellished, beginning with her playing online at 15 years of age.

Another tale that seems almost too unbelievable to be true is the one where Annette once played a $4 180-person Sit & Go tournament without looking at her cards – except on a single occasion. The truly unbelievable part of the story is she won the tournament.

Why anyone would do this is beyond me, but Annette claims to have taken on the challenge to highlight the importance of position.

The veracity of these stories is of course open to debate, but for the most part they are considered “mostly true” using politifact.com’s scale.

Stories like these, coupled with her online results made Annette an Internet poker legend at the online poker forums. But she became a poker legend when she became the youngest player to ever win a WSOP bracelet, and did so at the inaugural WSOPE Main Event.

While the outside world was busy asking “who is this teenage girl that won the WSOPE Main Event?” the tight knit online poker community was busy saying, “ZOMG Annette_15 just binked the WSOPE ME, LOL Donkaments!”

The WSOP goes to Europe

Attendance was also modest, and there very well might not have been a 2008 WSOPE if an 18 year girl from Norway didn’t capture the attention of the entire poker world by winning the Main Event, and £1,000,000.

Annette’s victory put the WSOPE on the map, and made the series seem like a much bigger spectacle than it really was, and a more prestigious tournament series than it really was. Had Annette not won (or some other impossible story arc presented itself) the WSOPE might have been one-and-done, considering poker fell off a cliff from the 2006 WSOP to the 2007 WSOP thanks to UIGEA.

But Annette was the perfect storm for the nascent tournament series.

She was record-setting young.

She was a woman, and the WSOP has historically not been a place where many woman succeed, so this was newsworthy in its own right.

She was an Internet legend with wild stories about her exploits.

She was somewhat controversial thanks to her claims and her demeanor at the table.

When she was finally old enough to play at the real WSOP (in Las Vegas you have to be 21 to gamble) she cashed four times, but was unable to make a single final table. Success at the WSOP LAs Vegas has continued to elude her, as she has never finished better than 8th in a WSOP event since her 2007 win.

Now 26 years old, Obrestad is still one of the top poker players in the game (she’s pocketed nearly $4 million in live tournament winnings and another $2.7 million online), but she’s never been able to replicate her amazing 2007 WSOPE performance, or live up to the hype of her early success – Annette was suppose to be poker’s Vanessa Selbst before there was a Vanessa Selbst.

She is still a legend, but Annette no longer has to deal with the unfair moniker of poker prodigy, or live up to the expectations of 2+2 fanboys.

In recent years Annette seems to have drastically reduced the amount of poker she plays both live and online as well. That being said, don’t lose sight of the fact that Annette is still only in her mid-20’s and if she does decide to rededicate herself to poker…look out.

Do you think you could follow a similar path to success as Annette_15? Why not get started by claiming a free no deposit Bet365 bonus to help you along?