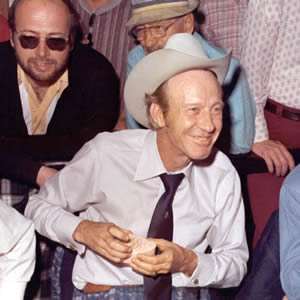 In the 1970’s and 1980’s the general public knew the name of, or should I say the nickname of, one poker player, Amarillo Slim.

Thomas “Amarillo Slim” Preston was the Phil Hellmuth of his day. A nonstop self promoter who appealed to the masses. In Slim’s case his celebrity had to do with his colloquialisms and tall tale style of storytelling – some being true, some exaggerated, some stolen, and some completely false.

Regardless, Slim was a character, and the American public loves characters, and Amarillo Slim – a poker player/hustler – became a minor celebrity.

Slim put his celebrity to good use, often being invited as a VIP guest for a casino opening or some other event, appearing on TV shows and in bit parts in movies, including appearing on the Tonight Show 11 times, which has to be a record for poker players – I’m not even going to look it up, it just has to be.

One of Slim’s attempts to cash in on his celebrity was lending his name to a World Series of Poker spinoff, the not-so-originally titled Amarillo Slim’s Super Bowl of Poker – likely hoping to cash in on both his name recognition and the tie-in with a sports championship that seemed to have worked so well for the WSOP.

The founding of Amarillo Slim’s Super Bowl of Poker

By 1979 the World Series of Poker had grown into something far grander than its original intent, as every professional player wanted to win poker’s most coveted title (and a piece of the biggest prize-pool the game had to offer) and amateurs and recreational players were also being drawn to Las Vegas to challenge the pros.

Up until 1979, the WSOP was the only game in town, and Amarillo Slim realized there was a void that needed to be filled. Pros wanted more tournaments like the WSOP, and perhaps so would amateurs.

“The World Series of Poker was so successful that everybody wanted more than one tournament,” Slim told author Storms Reback, “so I went to Barron Hilton and had my first one at the Hilton Hotel there in Vegas.”

In general terms, the first Super Bowl of Poker was a success, and remained a success for several years, but it constantly suffered from a seemingly unending logistical problem – where it would be held – as well as the not so minor problem of it being more or less a convergence of poker pros; for the most part the amateurs never turned up for the Super Bowl of Poker.

But it’s main problem was its venue. In 1979 it was the Las Vegas Hilton, but the Hilton closed its poker room soon after and a new home needed to be found.

The 1980 Super Bowl of Poker was held at the Sahara in Reno, Nevada, but by 1982 the tournament was once again looking for a new home after the Sahara Reno was sold to Hilton Hotels, which it found at the Sahara Tahoe in Lake Tahoe, Nevada.

The Super Bowl of Poker stayed in Lake Tahoe for several years, first at the Sahara and then moving to Caesars for a single year.

From there the Super Bowl of Poker went back to Las Vegas (sources vary on whether this occurred in 1985 or 1986) at Caesars Palace, where it remained until 1991, when it once again went in search of a new home after Caesar’s Palace closed its poker room.

Scrambling for a location, Slim and the 1991 Super Bowl of Poker ended up at the Flamingo in Laughlin, Nevada.

The decline of the Super Bowl of Poker

Once the Super Bowl of Poker moved away from Las Vegas it was pretty much lights out for the event. By all accounts Slim picked the destination that made him the best offer, a decision he would come to regret.

Speaking to the numerous venues the Super Bowl of Poker was held at over the years, Slim stated, “That’s the only one I ever had that wasn’t real good [Laughlin]. It was during the Gulf War, and nobody could fly in down there. You had to fly to Vegas and rent a car and drive 125 miles, and that didn’t go over real big.”

Not only was the venue a last minute choice and a logistical nightmare, but Laughlin isn’t Las Vegas; it’s not even Reno or Lake Tahoe as TJ Cloutier pointed out:

“In those days Laughlin was nothing,” Cloutier told Reback. “It was all older people going to Laughlin, and there was nowhere to go there… It was a big flop. Nobody showed up. We had a really small tournament. I think it started with two tables or something like that.”

The legacy of the Super Bowl of Poker

While it never managed to compete with the WSOP, and in the end went belly-up, the Super Bowl of Poker demonstrated there was an appetite for high-buy-in tournament poker outside of the WSOP. Poker was no longer a cash-game only business, and by the early 1990’s you had professional tournament players.

Amarillo Slim’s Super Bowl of Poker likely gave the founders and creators of the World Poker Tour and other events around the globe the belief that it could be done – if they didn’t make the same mistakes Slim made.