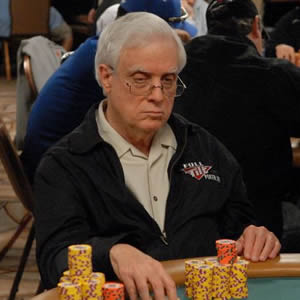 If I asked you to identify the three poker players that have won a WSOP Main Event Championship, are five-time bracelet winners, and Poker Hall of Famers, you wouldn’t have any trouble right?

Then how come you couldn’t come up with the third player (tell me you at least got Stu Ungar and Scotty Nguyen), Berry Johnston?

So why does Berry Johnston slip people’s minds?

It’s certainly not his skills or his reputation in the community.

For my money, Berry Johnston has to be the most unknown Poker Hall of Famer out there, and there is literally no reason Berry’s name shouldn’t be mentioned alongside the other legends of the game considering what he has accomplished in this game and the manner in which he did so.

What makes Berry’s anonymity even more remarkable is that Berry, despite being 70 years old, was a regular at the online poker tables at Full Tilt Poker during the poker boom years, yet the young players in the modern poker world are still blissfully unaware of what he has meant to the game.

Berry landed in Las Vegas in the 1980’s to pursue the life of a professional gambler after making a name for himself in his native Oklahoma. Berry quickly entrenched himself in the city as one of the game’s top players with his 3rd place finish in the 1982 WSOP Main Event.

The 1982 WSOP Main Event put Berry on the map, and that was his first tournament cash.

Phil Hellmuth aside, Berry has arguably the best World Series of Poker resume in poker history.

Berry is tied for 7th on the all-time WSOP list for bracelets with five of those bad boys, including the 1986 WSOP Main Event. Oh yeah, he also finished in 3rd place in the 1982 and 1985 World Series of Poker Main Events, and 5th in 1990.

When Mike McDermott rhetorically asked Joe how the same five guys ended up at the WSOP final table every year he was basically talking about Berry Johnston.

Berry is ranked 6th in WSOP career cashes with 66; 8th with 29 WSOP final tables; he has the most Main Event cashes in WSOP history with 10; and only Jesse Alto and Doyle Brunson have more Main Event final tables, five each, than Berry’s four, and both of those players competed in the WSOP when you started at the final table.

Berry’s success wasn’t limited to just the World Series of Poker either, Berry has roughly $3.5 million in career tournament earningb and won a total of 16 tournaments during his poker career.

Berry dominated in a time before the TV cameras and before poker’s mainstream appeal, when the game was looked down upon and not considered honest work by the masses. Being a poker pro in the 1980’s and 1990’s basically relegated you to a life of anonymity, but with a resume like Johnston’s this shouldn’t have been the case, and I suspect there were other forces at work.

Perhaps it was Berry’s quiet confidence and strict adherence to poker etiquette that has caused him to become one of the game’s forgotten superstars. There were no brash outbursts or “woe is me” stories when it comes to Johnston. He simply went about his business quietly and without any fanfare.

You also won’t find many Internet articles or interviews with Johnston, or even quotes from the man himself. He simply played cards and then went home to his family.

Perhaps no Johnston story exemplifies this more than when he was eliminated from the 1985 WSOP Main Event in third place after losing with AK to TJ Cloutier’s AJ when a Jack hit the turn. According to Mike Sexton, Berry stood up, shook the hands of the two remaining players (TJ Cloutier and Bill Smith) and turned to his wife and said, “Honey, I’m hungry. Can we go get something to eat now?”

A true family man, Doyle Brunson perfectly and succinctly summed up Berry Johnston as he has done with so many other players, saying, “What I admire most about Berry is not Berry the great poker player, but Berry the man. He is a deeply religious and devoted family man, who has always been a gentleman at all times.”