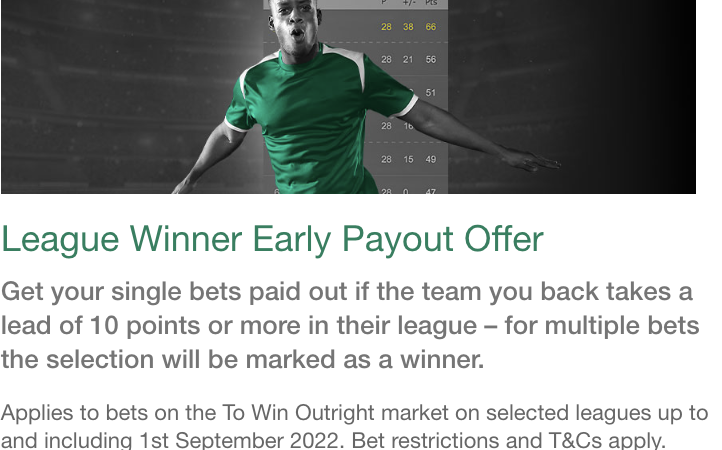 Want to get you bet paid out on a selection of League winners, if they go 10 points clear? Check out bet365’s League Winner Early Payout!

Last year’s football season provided us with plenty of drama, with the Premier League going down to the wire once again before Manchester City claimed the title by a single point over Liverpool, despite holding a 14-point lead over their rivals at one stage of the season.

Across Europe, there were a mix of close races and runaway winners of various leagues. Bayern Munich and Paris St Germain were comfortable winners of their respective leagues in Germany and France, while in Italy, AC and Inter Milan went head to head for the title, with AC coming out on top.

In Spain, with both Barcelona and Atletico Madrid having struggles, Real Madrid were comfortable winners of the La Liga title and then coupled that with the Champions League after beating Liverpool 1-0 in the final in Paris.

With tomorrow being the 30th June, a large number of players will become free agents across the world and it should be interesting to see where a number of these players end up, especially those that are reportedly being linked with a move, such as Paul Pogba, Jesse Lingard and more.

So there’s still a lot to be sorted ahead of the new season, which starts in little over a month but that hasn’t stopped many people making their early picks for who will win a number of top divisions at bet365 Sport.

And if you place a bet on a team to win any of 12 different divisions, then you could be in line for an early payout thanks to the return of a popular bet365 offer.

It’s the League Winner Early Payout bonus and we’ll explain how it works below.

To qualify for this offer, simply place a qualifying bet on any of 12 divisions (the full list is outlined in the terms and conditions of the offer below).

If the team you back then goes ten points or more clear during the season, at any point, then your bet will be paid out as a winner.

However, if a different team then goes on to win the title, then that bet will also be paid out to winning punters, so it is an offer which effectively doubles your chances of a payout if the team you select can open up a big lead, even if they don’t win the title come the end of the season.

The offer is available on the following leagues for the 2022/23 season:

Who Are The Teams To Consider Backing For This Offer?

In terms of this offer, there are two factors you need to consider when making a selection for this bet. First and most importantly, is the team you are selecting likely to win their division. Then there is the issue of whether the team is likely to open up a lead of 10 or more points during the course of the season.

Of course, if a team does open up a 10-point+ gap on their opponents, then they are very likely to win the league title. That doesn’t always happen, but generally a team that opens up that kind of gap will go on to be named champions.

So in effect, your selections in most cases would be the same for both criteria.

For our tips below, we have taken into account each league, the strength of the division and how many teams are genuinely capable of winning the league title.

In all cases shown above, the teams we have listed stand an excellent chance of being Champions and/or opening up a 10-point gap at some point in the season which would be enough for the bet to be paid out by bet365.

In Ligue 1 and the Bundesliga, PSG and Bayern Munich are the clear favourites in these leagues and you are not going to be winning much money if you bet on them for the title. However, you do stand a good chance of an early payout given by how much each team usually wins it’s league.

In other leagues, it is a bit less clear. In the Premier League, Man City and Liverpool are the two favourites and have been for many years now, the same is true in Spain with Real Madrid and Barcelona, now that Atletico Madrid have seemingly dropped off the pace, while in Scotland Rangers and Celtic are perennial title chasers.

The best value may come in Serie A where three teams look to be in with a chance of the title, Inter Milan, AC Milan and Juventus and that division does offer the most intriguing possibilities.

For the other leagues part of the offer, the difference between the best teams and the rest is much smaller, especially in the lower reaches if the English League where teams can be very well matched and so picking a team to win the league here, let alone going 10 points clear, can be very tricky indeed.