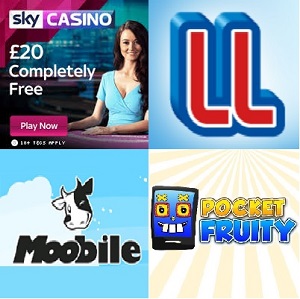 There’s some big news for customers thinking about joining Bet365 Poker and we’ll bring you details of what is an enticing new offer for potential Bet365 customers shortly.

Before that however, let’s take a look at two of the mobile casinos on our site, Moobile Casino and LadyLucks Casino, both of which are offering a fantastic new promotion for January which could see several players bankrolled by the casino for their play throughout the month.

If you are looking for a way to play at two of the best mobile casinos this January, but in the most affordable fashion, then you need to take a look at either Moobile Games or LadyLucks Casino as

both are currently offering the same Big Bang promotion.

This has nothing to do with the Big Bang Theory TV show, or indeed the Big Bang hypothesis for the start of the universe. But for casino players, it could prove lucrative.

As you will know, both of these casinos already offer players a chance to earn a no deposit bonus when they sign up, but if you get lucky when playing on the sites this January, you could find yourself in receipt of one of three superb bonus deals.

The Big Bang promotion is running across both mobile sites and sees 100 players given free cash for three, four or even eight weeks of the new year. There are 90 daily winners to be awarded, 8 weekly winners and two very lucky Big Bang winners.

The Big Bang promotion works by players visiting either site and playing real cash games. The qualification criteria for each of the three draws is slightly different:

If you are the name picked out of the hat for the Daily Draw, then you will receive a £45 cash bonus from the casino, which you will receive in £15 instalments over the following three weeks.

Then if you are the lucky player selected to win the weekly prize, then you win £120 in cash, which is allocated to you in four weekly instalments of £30.

Finally, to stand a chance of winning the Big Bang prize, players need to play through £10 cash on three days of each week of the promotion. If you do this then you are entered into the Big Bang Draw which will see two players awarded the competitions top prize of £400.

The prize is awarded in chunks of £50, which is paid to the players over the course of eight weeks.

If you receive a cash prize, then it does have a small play through requirement. You cannot withdraw the amount until you have played through the amount you have won at least once, so if you win the £400 prize, you need to spend £400 in wagers on the site in order to release any funds you may generate from those bets.

Why not take a look at the Moobile Games no deposit bonus deal, or LadyLucks Casino no deposit offer via our review pages to learn about which site may be the best option for you to join.

Bet365 Poker has a brand new introductory offer for customers 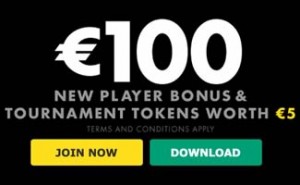 There’s big news from Bet365 Poker as since the 5th January 2015, the site has revised its new player offer for the first time in a good while.

The details of the new player offer are as follows:

€5 no deposit bonus – new players still receive a completely free no deposit bonus of €5 as soon as they have registered on the site and created a username. This allows you to trial the site before you make any deposit into your account to ensure that it matches your requirements.

100% first deposit bonus of up to €100 – Bet365 have reduced the level of the first deposit from €1,000 to €100 and while at first this may seem like a major reduction in value, in fact this is a better deal than was previously available for the vast majority of Bet365 poker customers.

The reason for this is simple. The old introductory offer was very tough for a medium to smaller stakes player (the majority of Bet365 customers fall into this bracket) to realise fully. As such, it often meant that these players would not realise any of their bonus, or would only realise a small fraction of it.

However, the new bonus deal means that more medium to lower stakes players can not only qualify for a full bonus, but now that Bet365 have reduced the amount of points you need to earn to start realising your bonus markedly, you can start getting your hands on your bonus cash more quickly.

Indeed, under the new bonus terms, you can realise your full bonus using 100 merit points fewer than it took under the old system to release the same amount of money.

The upshot of this is a smaller bonus, but one that more Bet365 players have a far greater chance of realising either partly, or in full.

€100 New Depositor Freeroll token – New customers will still receive a free tournament token into the next new depositor freeroll event, which is held each Wednesday at 19:30 GMT.

€5 free in tournament tokens – A brand new aspect to the new player deal is that new players will receive an additional €5 worth of tournament tokens, which will allow them to play a number of games on the Bet365 Poker site, including sit & go games, Twister Poker and more. Your free tokens will be credited to your account upon receipt of your first deposit of €10 or more.

The new changes to the Bet365 Poker introductory offer may seem to be a lot less than originally offered, but in reality, the company have simply changed a bonus that very few players could realise in full, into one that a lot more of their customers have a good chance of receiving the benefit of.

If you would like to join the site to take advantage of this new offer, click on our dedicated Bet365 no deposit bonus page and this will have everything you need to join up right now.