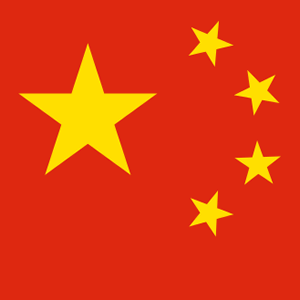 In Open-Face Chinese Poker each player receives 13 cards and needs to arrange these cards into 3 different poker hands.

The only site online that offers real-money OFC is TonyBet. Sign up here.

The ranking for the 5 card hands is the same as for regular poker.  Namely the ranks from lowest to highest are: High card, Pair, 2 Pair, 3 of a kind, Straight, Flush, Full House, Straight Flush, Royal Flush.

The ranking for the 3 card hand is simply: High Card, Pair, 3 of a kind.  In other words with the 3 card hand you can’t play things like straights and flushes as they are too easy to make. The best hand is therefore AAA.

Ordering these hands correctly in decending strength (bottom to top) is a crucial part of the game of Chinese Poker.  For example if you put trips as your Front hand and just 2-pair as your middle hand, then your entire 3 hands will be declared dead.  In other words the overall hand is said to be “fouled”.

The game can be played with 2, 3, or 4 players and is played using a points system.  You also use a dealers button similar to other poker games.

When it gets down to the final few cards is where the real excitement starts, because you are often sweating draws, or sweating the possibilty of fouling your hand.

The scoring in Open-Faced Chinese is done part on winning one or more of the 3 hands, and part on a Royalty system for good hands.  You receive 1 point for beating your oppenent’s corresponding hand (eg Back hand vs Back hand), and a 3 point bonus for scooping (winning all 3). 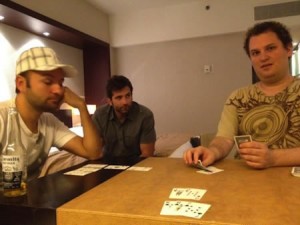 Sometimes this is also refered to as sweeping. So if you win 2 hands and lose 1 you net gain is 1 point.  But if you win all 3 (or lose all 3) then your net gain (or loss) is 6 points.

With Royalties you receive the following points for Back hands:

(Some players might play 10 for Quads, 15 for a Straight Flush, and 25 for a Royal, so it is wise to agree the Royalites system beforehand just in case)

You receive the following points for Middle hands:

You receive the following points for Front hands (the 3 card hand):

Of crucial importance you don’t receive any points at all if you foul your hand, but you still must pay out all points to other valid hands, including all Royalties.

Remember that before you start playing you normally agree a certain price per point.  eg $1 a point.  And then only when the games ends (after multiple hands) do you pay/receive the money.  So make sure you keep a running points total if you are playing live.  Often players will also set a stop-loss of the maximum they are want to lose.  Once reached that amount will be paid out and no more, regardless of the final points totals.

A good strategy to avoid fouling is to place higher cards in the Back hand, and slightly lower in the Middle hand, and then the lowest denomination cards in the Front hand.  That way when pairs are made the 3 hands remain in descending order (bottom to top).   This approach can be tweaked if say your first 5 cards have 4 to a flush or 4 to a straight.  Then you can make this the basis of your Back hand with confidence you’ll complete that hand in the next 8 cards. 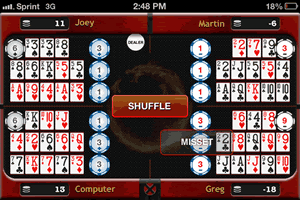 If you’ve got a bit more gamble then you might choose to aim mainly for royalty points even as the number of cards left to be dealt get less and less.  By doing so you are taking a bigger risk that you foul your hand, or end up with busted draws (weak hands).  The rewards can be big for this if you hit, so it is often a balancing act between how big the reward can be and how often you mind giving up a minimum of 6 points each time if you foul.

You should always keep a good eye on what upcards there are on the board as a whole (eg your opponent(s) hands as well as your own) as this will tell you how live your draws are.  You can in fact calculate this very accurately if you are good with odds, hence part of the reason Open-face Chinese is a very skillful game.

Talking of straights, be careful not to place too much value to making a straight, because the royalty for this is only 2 points in the Back hand.  Remember you could lose 6 points alone by fouling so know when to give it up if it’s looking unlikely.

If you seem to be getting dealt a very poor hand (eg after 7 to 10 cards) it can be a good idea to play defensive to try to win one specific hand, because you are looking at just a 1 point net loss by losing 2 out of 3 hands, and a 6 point net loss if you lose all 3.  A good way to do this is to make a strongish hand at the Front (whilst not fouling obviously) because often players have a couple of really good hands (Back and Middle) but the Front hand gets neglected as just any old high card.  Another way (when the deal/board dictates) is to make a strong as possible Back hand but effectively abandon the Middle and Front.

It is also important to factor which hands your opponents are aiming for and what their likelihood is of getting there. For example if it looks like there is a strong chance of them fouling their hand you could change your focus from drawing to a big hand yourself, to just making sure you don’t foul.

What is Fantasy Land in OFC?

Fantasy Land gets triggered if you get a pair of Queens as your Front hand without fouling.  This can be tricky to do because it does mean you need a pair of Kings or higher in the middle and a pair of Aces or higher in the Back hand.  If you manage to make a valid hand with Queens up Front then on the next hand you will get dealt all 13 cards face down right from the deal.

This can obviously give you a strong advantage as you are not reliant on draws, and you can place those 13 cards optimally into their 3 hands.

The fun/skill to this comes from the fact that there are only 4 queens, and the chances of them arriving at the ideal time are slim.  So often you might need to make a choice early or mid-hand as to whether to pair the Queen up front, with the knowledge that you still need to make better hands than that in the Back and Middle.  It’s a gamble, with good rewards if you make it.

What is Pineapple Open Face Chinese?

We’ve got a guide to Pineapple Open Face Chinese here.

Courtney Harrington has written a number of OFC strategy articles at PocketFives.com.

Here’s the official strategy thread for OFC at TwoPlusTwo.

The only site we’re aware of offering open-face chinese poker online for real money is TonyBet. Click here to sign up at TonyBet, which offers both OFC and Pineapple OFC.

Play OFC or POFC at TonyBet.

The most popular app for playing open-face Chinese online is the Chinese Open Face Poker app (available for iPhone & iPad here). There was some recent controversy surrounding the app when Barry Greenstein claimed he had been cheated at OFC  by someone exploiting a flaw in the game, but it appears that the bug in question has now been fixed. There have also been some questions raised about the quality of the AI employed by the app and its general stability. But due to the lack of a competitor, it remains the primary app for playing OFC on a mobile device.

There is another app for OFC in the App Store which is newer than the COFP app, but has garnered generally positive reviews: Secure Open Face Chinese Poker.

We cannot stress the following point enough: Be very careful about playing OFC for money using apps as the game is still in the very early stages of adoption and you just don’t know for sure what you’re getting.