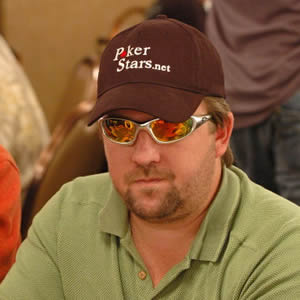 In 2003 the poker world was indelibly changed when an unknown accountant from Tennessee, with the unbelievably fitting name of Moneymaker, playing in his first live poker tournament, was able to outlast 838 other players, including a final table full of seasoned poker pros to win the World Series of Poker Main Event and usher in a new era of poker.

In fact, if it were not for Chris selling 40% of his action in the tournament, he might not have been able to afford the trip to Las Vegas, and poker might have never experienced “The Moneymaker Effect.”

This is the story of the staking deal that allowed Chris Moneymaker to go to the 2003 WSOP and eventually win the Main Event.

The Story Behind the PokerStars Satellite

A lot of people wonder why Moneymaker would play in a satellite tournament for a WSOP Main Event seat when he couldn’t afford to pay his way out to Las Vegas and needed to find backers. Well, as it turns out there is a story behind that story, as Chris Moneymaker told Grantland.com, playing in the satellite tournament on PokerStars was itself an accident:

“…back then, PokerStars didn’t have it broken down all nice and neat like they do now. … I saw that there was a $39 sit-and-go with 17 of 18 seats filled, and I just clicked on it really fast to try and get the last seat… To be honest, I didn’t know it was a satellite. If I knew I never would have played it.”

Play For the Seat!

After winning the initial $39 satellite Moneymaker found himself in the main satellite for the WSOP Main Event, and he had one thing on his mind… finishing in 4th place!

Why 4th place? As it turned out, the satellite tournament would hand out three seats to the WSOP Main Event, and the 4th place finisher would receive $8,000 in cash; a prize Moneymaker coveted far more than the latent value of the Main Event seat.

As the tournament progressed, and it looked like a seat to the WSOP Main Event was all but secured, Chris made his move and started playing for fourth.

At this point Moneymaker’s friend Bruce Peery, who was railing Chris in the tournament, gave him a call, as Moneymaker explained in the Grantland article:

He called me up and said, “What are you doing?” And I said, “I’m trying to get fourth place.” And he’s like, “Dude, don’t do that. Take the dang seat! You’ll never get to play in that tournament ever again.” But I said, “Why do I want to play against the best in the world? I play as a hobby. I’m playing for my house.” But Bruce convinced me to go after the seat after promising me $5,000 in exchange for half my action. So I went ahead and won the seat.

With the Main Event just a week away, Bruce Peery ended up backing-out of the staking deal he had agreed to during the satellite, leaving Moneymaker to scramble at the last minute to find a new backer, or backers as it would turn out.

Chris first went where we would all go if faced with such a situation, Dad. After he managed to secure $2,000 from his father, and I’m not making this up, another $2,000 from a friend named David Gamble, Chris was on his way to Las Vegas – so a guy named Gamble backed a guy named Moneymaker in the WSOP Main Event: Hollywood would call that script “too farfetched” but it was in fact reality.

It’s hard to say what Chris Moneymaker needed the stake money for (you can get to Vegas and stay for a week for far less than $4k), and it was probably used for a number of things including travelling expenses, paying bills, and perhaps even some gambling money in his pocket for the Vegas trip, but one thing is definitely for certain, Chris, PokerStars, and his backers, struck gold in Las Vegas.

Chris showed up at Binion’s to register for the 2003 WSOP Main Event along with the 38 other qualifiers PokerStars sent to the Main Event in 2003, and like his online qualifier brethren Chris was decked out in a PokerStars branded hat and polo shirt, just one of 39 players considered dead money at the time but somehow his father had a feeling, as he relayed in the Grantland article:

You know how you get one of those weird feelings? As soon as he called me and told me he’d won the seat, I had this feeling that he’s gonna win the darn thing. I told my wife about it, but I wish I’d written it down and sealed it and put it in a safe-deposit box.

And the rest, as the saying so often goes, is history.

P.S. How would you like to be Bruce Peery, knowing you let $1.25 million slip through your fingers? Not to mention being relegated to a mere footnote in one of the most legendary stories in poker history?

Author’s Note: In researching this article I relied heavily on the Grantland.com article When We Held Kings which was released earlier this year prior to the 10 year anniversary of Chris Moneymaker’s WSOP win, which was the first time all of the principals had been interviewed for a single story.

Other resources I used to fact-check certain numbers and claims include the twoplustwo.com poker forum, CardsChat.com, and Wikipedia.org.

Looking to have your own amazing poker run? Grab a Bet365 no deposit bonus code and be on your way!