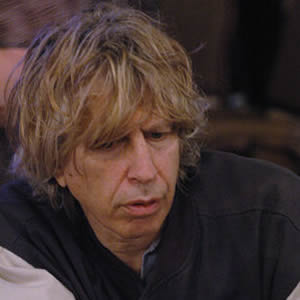 Mickey Appleman is the first player profiled in this series I’ve somewhat interacted with, having played briefly with him during a side game at a World Poker Tour tournament at Foxwoods in I want to say 2004, but I could be off by a year either way.

The reason I mention this is because, to be entirely truthful, prior to writing my profile of Ken Flaton I wouldn’t have been able to pick him out of a lineup. I had probably seen Ken Flaton’s picture a handful of times over the years and I certainly knew of him, but there wasn’t anything remarkable in his appearance that would stand out to me and make him memorable.

The same cannot be said for Mickey Appleman.

Basically, if you’ve seen Mickey Appleman once you will have no problem remembering him the next time you cross paths!

Mickey comes across as a mixture of a mad scientist, an 1980’s workout guru (with a sweatband keeping his flowing golden locks in place) and an old hippy who has wandered inside after months of living off the grid.

As Robert Turner described him, “He always dressed like a throwback from the sixties with long hair below his shoulders.”

But Appleman’s external appearance belies his internal faculties, and when it came to poker, or betting in general, you’d be hard-pressed to find his equal.

Mickey was practically created whole cloth to be a poker player, and long before game theory statisticians and math whizzes flocked to the poker tables during the poker boom there was Mickey, who received an MBA in Statistics from Rutgers after earning a BA in Mathematics from Ohio State University.

In addition to his mathematical mind, Appleman was also hypercompetitive, having competed in sports throughout his childhood and teen years, which seems to be another trait of successful poker players regardless of generation.

Over the years Mickey has kept himself in terrific shape, as Robert Turner told me:

“During tournament times, especially during the World Series of Poker, we would see each other in the sports books checking the morning lines. I would be there eating a donut drinking coffee and tired, and he would be eating nuts and berries out of a bag and say he just finished a 3-hour run.

This was every morning. This must be the healthiest poker player who ever played the game.”

Furthermore, Mickey has a lot of gamble in him, once telling Nolan Dalla in a pokerpages.com interview that if you were to list the top 10 action-givers, “me, Stuey [Ungar], and Jack [Strauss] would have been at the top of the list of people who weren’t afraid of action.”

Finally, Appleman has life experience, which makes him the all-around perfect poker player. He is a competitive and physically fit person with a mathematical mind and he is certainly willing to gamble.

Mickey Appleman may have been born to play poker but he never fell in love with the game; poker was more like his mistress for Mickey while sports-betting was his true love. Mickey once opined that it was hard to sit around and play poker for hours when you can bet $100,000 on a game.

Still, Mickey has managed to compile a pretty impressive resume, despite splitting his time between poker and sports-betting and later his family.

Appleman, like several other big names in the game, was a participant at the Mayfair Club in New York, which produced the likes of Erik Seidel, Jay Heimowitz, Jason Lester, Steve Zolotow, Howard Lederer, Dan Harrington, and of course Mickey Appleman.

But it was in Las Vegas where he’d really leave his mark as a poker player.

Mickey has won four WSOP bracelets and finished in the top five another 12 times in WSOP events (that’s 17 top 5 finishes), as well as making the final table in the 2000 WSOP Main Event. In all, Mickey has cashed in 43 WSOP tournaments.

Keep in mind that Mickey rarely travelled outside of Las Vegas for tournaments and was also a dual threat in poker, capable of holding his own in virtually any cash-game in the world.

Quiet and unassuming…except for the hair and headband of course

Despite his “unique” appearance, Mickey is a no-nonsense poker player.He’s quiet and polite, and doesn’t draw very much attention to himself.

As Robert Turner explained it, “If there ever was a poker player I hated to see at my table, it was Mickey Appleman because he was and is one of the greatest poker players of all time. He seemed always to be in deep thought analyzing your play. He was a very cerebral player.”

Photo by flipchip / CC BY