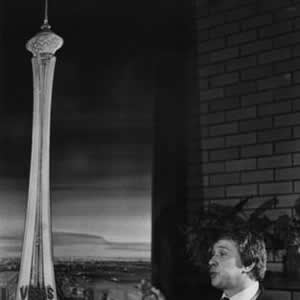 Bob Stupak is a legend in Las Vegas. Stupak was the P.T. Barnum of the gambling Mecca (an angry and somewhat crazy P.T. Barnum), and his mark has been left across the city, and was honored with a spot in the Gambling Hall of Fame in 1990.

Stupak renamed one of his casinos Glitter Gulch – a term that has been synonymous with downtown Las Vegas ever since – created the famous neon Vegas Vickie sign, and of course was the creator of Bob Stupak’s Vegas World, which was pulling in $100 million in revenue in the 1980’s.

Stupak was first and foremost a promoter. He famously donated $100,000 to the United Negro College Fund in exchange for a spot on the Harlem Globetrotters roster. He grabbed even more headlines when he publicly bet $1 million on Super Bowl XXIII – Stupak had the Bengals and the points and won the bet.

He’s also known for some colossal failures. It was Stupak who had the idea (which turned out to be one of the worst ideas in Las Vegas history) for the Stratosphere, and even (unsuccessfully) ran for Mayor of Las Vegas in 1983 and 1987.

In 1996 the Mayor of Las Vegas, Jan Jones, gave Stupak the honorary title of “Mr. Las Vegas,” for his tireless and creative efforts to promote the city. Stupak passed away in 2009, and with his passing the era of Las Vegas casino owner showmen passed into history.

Because of his larger than life and often gruff personality, and his sometimes zany and nearly always bizarre exploits, a lot of people overlook that Stupak’s poker accomplishments were pretty impressive.

Stupak is said to have caught the poker bug from his second wife, Sandra Joyce Wilkinson, nicknamed “Lady Maverick” for her poker acumen – Stupak gave himself the nickname, the Polish Maverick. Unlike some other whales that have appeared in high stakes games, Stupak was a poker player before he was filthy rich.

In 1983, he played host to the America’s Cup Poker Tournament. Not only did he promise the winner a Rolls-Royce Silver Shadow, but realizing the game of poker offered unique publicity opportunities, he also challenged all comers to play head-to-head for stakes ranging from $5,000 to $1 million.

Ever the showman, Stupak took on Mike Caro’s ORAC poker computer in 1984 for $500,000. the match aired on the hit TV show Ripley’s Believe it or Not and Stupak emerged victorious.

Stupak wasn’t just into poker stunts though, he was a poker champion too, with $865k in career tournament winnings according to his Hendon Mob page. In 1989, he won the $5,000 no-limit deuce-to-7 event, one of his five WSOP final tables – he cashed in eight WSOP tournaments.

More astonishing was Stupak’s World Poker Tour results, where he cashed 11 times from 2003 through 2008, with a 6th place finish in the 2003 LA Poker Classic and a pair of 10th place finishes in back-to-back events in 2004 – The Legends of Poker and the Borgata Poker Open. And he was accomplishing this in his 60’s!

Stupak introduced himself to the new generation of poker players during the Poker Boom when his quirky behavior and grizzled face hidden by massive sunglasses (the after effects of a motorcycle accident years ago) made him an instant curiosity.

While he certainly had some memorable moments at the poker tables, Stupak is (obviously) best known for his entrepreneurial attitude, taking on seemingly impossible projects and emerging with a pretty good track record.

His casinos were never known as bastions of poker, he certainly carried his love of the game into his projects, and while there were very few permanent poker rooms on Stupak’s casino floors, he played host to many poker tournaments and promoted and supported the poker community and industry in Las Vegas over the years.

The title Mr. Las Vegas really couldn’t have been awarded to a more deserving person.

You can learn more about Bob Stupak in the book: No Limit: The Rise and Fall of Bob Stupak and Las Vegas’ Stratosphere Tower