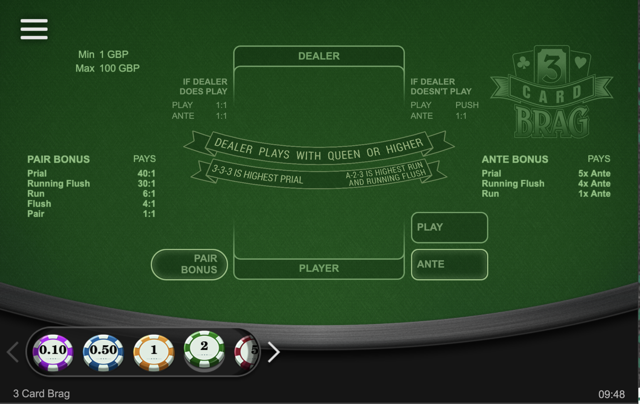 It may seem strange to think that Poker was a game that was derived from other card games, but that is very much the case. While you can’t trace the history of poker back to any one particular game, there are some that have played a role in its development and eventual success and one of those games was 3 Card Brag.

The game was originally developed in the 16th Century in the United Kingdom and it was itself based on a game called Primero, which was hugely popular at the time of Queen Elizabeth I. The game, which was originally played by two or more players, has been altered over time to become a casino game played by a player against the casino. Not as popular perhaps as blackjack or poker, 3 Card Brag is still the game of choice for a select number of punters.

If you want to try your hand at 3 Card Brag and you are not yet a member of a site, then check out the latest bet365 Games new player offer available for new customers. Not only will you get a great value bonus when you join, but you will also gain access to this great version of 3 Card Brag, as well as all the other top bet365 sites, including of course, bet365 Poker

Remember, you can enjoy a wide array of card games too at a number of new casinos that are available in Pennsylvania. For the latest details on what the best offer is to join, check out the latest playsugarhouse bonus code information page for details and information on how and where to sign up to play a wide range of casino games.

Let us now learn a little more about this particular version of 3 Card Brag at bet365 Games and just how easy it is to play.

Let’s explain what these bets mean in simple terms:

A Bonus Bet pays out at a stated set of odds in this version of 3 Card Brag and they are as follows:

Furthermore, if a player lands a hand in the standard game that is rated above a Run or better, then they will also receive a special Ante bonus on top of any winnings that they land in the game.

The final thing to note is how the hands are ranked in a game of 3 Card Brag as they are slightly different to standard poker rankings, and of course, the dealer and player only receive three cards each during each game.

These are the hands you can have in 3 Card Brag, ranked from highest to lowest in value:

Obviously, if players end up with the same hand (such as each land a pair) then the highest value of the cards used to make the hand will determine who is the winner of the hand.

Now that you understand the bets made and how each of the possible hand ranks in 3 Card Brag, here is how a typical game progresses.

How to Play 3 Card Brag

Once you have made your bet to start the game, the game begins by the player being dealt three cards face up on screen. The dealer is also dealt three cards, but these are displayed face down.

If a player folds, then any bet then the Ante bet they have placed and any Bonus bet placed, is lost and the game will end at that point.

If a player places the Play Bet, then the game will continue by the three dealer cards being revealed.

At this point, the game will compare the two hands and decide what the outcome of the hand is based on the cards held by the dealer and the player. But the first thing that is determined is whether the dealer’s hand qualifies to be played or not.

If the dealers hand does qualify and the dealer wins the hand, then the players loses their Play and Ante bets, but could still earn a payout from their Bonus bet if they made one. If the player’s hand wins, then the player receives an even money return on their Ante and Play bets, plus any Bonus bet winnings they may have.

A player can of course also earn an Ante Bonus return if their winning hands is a Run or better and these are paid out on top of the standard winnings received by the player as outlined above. 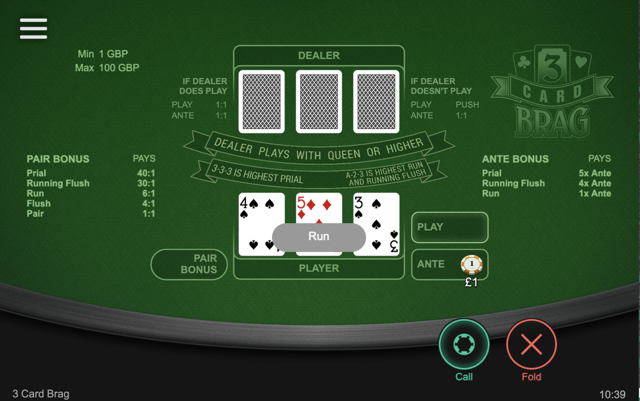 The only decision a player makes in 3 Card Brag is whether to play or not and as such, that is the major strategic influence of the game. However, seeing as not playing means you lose, you tend to find that most brag players will tend to play a far wider range of hands than they would do if playing poker for example. It only tends to be the poorer High Card hands that players tend to fold.

That is the essence of 3 Card Brag at bet365 Games so why not load up the game and give it a try today?