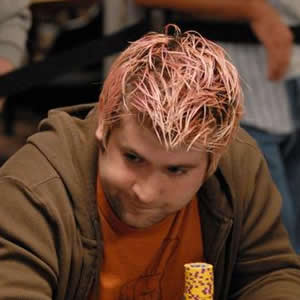 Poker has a long history of usurping Championship titles and accolades from professional sports. The two most famous are the World Series of Poker and Amarillo Slim’s Super of Bowl of Poker, but not too far behind those is the Triple Crown.

In baseball the Triple Crown is given to a player based on their individual success over the course of a single year, as it is awarded to the player who leads the league in Batting Average, Home Runs, and Runs Batted In.

In the 11 years winning poker’s Triple Crown has been possible (the EPT is the newest of the three tournament series/tours having begun in 2004) just five players have managed to become Triple Crown winners[ii].

The first to do so was Gavin Griffin.

Griffin isn’t the poker superstar he was during the early days of the poker boom, but he will forever go down in the poker history  books as the first player to win poker’s Triple Crown.

Let me see your ID

When Gavin griffin first showed up at the World Series of Poker in 2004 he was so young (22), and blessed with a baby face to boot, few people thought him old enough to be sitting at a poker table. Even fewer saw him for what he truly was, a seasoned online player with thousands upon thousands hands of poker under his belt.

His skill, coupled with people underestimating him based on his age (Internet players were considered fish at this time as well) allowed him to walk away with a WSOP bracelet in 2004 in the $3,000 Pot Limit Holdem tournament – a tournament format not known for attracting young players to begin with.

At the time he was the youngest player to ever win a WSOP bracelet, which gave him far more exposure than would be expected from a single preliminary WSOP victory.

In 2007 Griffin won a European Poker Tour event, and a massive $2.4 million payday when he captured the Season 3 Grand Final title.

Griffin had wallowed in live poker anonymity since his breakout WSOP victory in 2004, unable to post a single six-figure cash in the live tournament arena over the course of the three-year-span leading up to his impressive EPT win in Monte Carlo. With his lack of results following his 2004 WSOP win, people were beginning to wonder if Griffin was just another luckbox who binked a big tournament early in his poker career.

History is made in Atlantic City

If his win in Monte Carlo didn’t reestablish Griffin as a tough tournament player his victory in Atlantic City certainly did. But once again his success was fleeting.

Griffin eventually landed as a sponsored pro for PokerStars thanks to his historic accomplishment. His sponsorship deal only lasted a couple years, and in 2010 PokerStars and Griffin parted ways.

In 2012 Gavin Griffin nearly won a second WSOP bracelet, finishing second to 71 year-old Herbert Tapscott in an Omaha 8 or better tournament. ending the second long drought of his career.

However, the poker life hadn’t been easy for the one-time prodigy, which Griffin candidly detailed firsthand.

In early 2012, prior to nearly winning bracelet #2, Griffin wrote an insightful column for Card Player Magazine where he details his meteoric rise to poker millionaire, and his subsequent fall to grinding at the low stakes tables in Los Angeles.

[i] Online poker also has a Triple Crown which is awarded by the website PocketFives.com. The online Triple Crown goes to a player who wins three qualifying online tournaments at three different sites in the span of a week. Chris Moorman has won the P5’s Triple Crown 21 times.

[ii] At least 55 players are just a single victory away from a Triple Crown.