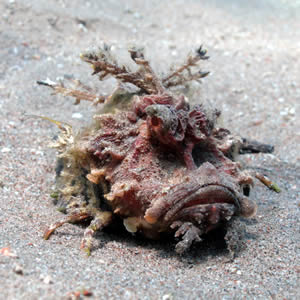 In the modern poker world there are literally dozens of well known poker players who hail from the UK, including a handful of full blown superstars like Chris Moorman, Liv Boeree, and Sam Trickett.

But this wasn’t always the case.

Before the poker boom and the subsequent globalization of poker, most, if not all, poker “stars” were Americans, and even though the UK had some really talented poker players, they simply didn’t capture the imagination the way the colorful American poker pros were able to, mainly because so few of them flew out to Las Vegas for the WSOP, and even by 1997 only two had managed to win a bracelet.

Their lack of success on the big stage, and they’re more reserved mannerisms at and away from the tables (there weren’t many Amarillo Slim’s or Phil Hellmuth’s in Europe) caused them to be overlooked.

There was one exception. Dave Ulliott, better known by his nickname, Devilfish.

Devilfish became the first European superstar in poker when he became the third Englishman to win a WSOP bracelet in 1997.

Devilfish is not what most people would term a nice guy.

Ulliott’s formative years were spent betting, getting fired from random jobs, and committing crimes ranging from safe cracking to assault to armed robbery. He also spent plenty of time in prison. He did nine months for his role with safe-cracking team before his 21st birthday, and another 18 months for a fight when he was 28.

Following his last release from prison Ulliott “went straight” (purportedly only after his accomplice in an upcoming robbery was arrested before they could pull the job) and got a respectable when he became a professional gambler.

Through gambling, particularly poker, Ulliott crafted his Devilfish image. The Devilfish would slick back his jet black hair; dress sharp by either donning a fine suit, or when the situation called for it, a bit more intimidating leather coat; with the ensemble finished off with a pair of custom knuckledusters – one reading DEVIL and the other FISH.

In the poker world, Devilfish was unique in both dress and mannerisms.

Victoria Coren summed up Devilfish perfectly when she wrote: “I was nervous to review it [Devilfish’s autobiography] … Dave Ulliott is a friend of mine. And he has a gun… The book is, like the man, fast, funny, scary, smart, cocky, colourful, and I adore them both.”

There was also a second book written about Ulliott, by the author Des Wilson – Swimming With the Devilfish. Wilson’s book was supposed to be an authorized biography of Ulliott’s life, but Devilfish thought it was a bit too “real” and decided to scrap Wilson’s book (which was later published anyway) and write his own autobiography, the one Coren adored.

Ulliott made a name for himself in the high-stakes poker games across the UK, and his larger than life personality cemented his reputation in the poker world – which is important for poker players like Ulliott who routinely go broke and need to borrow, and it also helped him gain a cult following outside of the UK during the early days of the poker boom.

In the UK he is considered one of the country’s poker legends and is easily one of the most recognizable poker players past or present.

With $6.2 million in career tournament earnings, Ulliott is #2 on England’s all-time money list according to TheHendonMob.com.

Devilfish is a World Series of Poker bracelet winner (he was the 1997 $2,000 Pot Limit Holdem Champion) and has finished 2nd on four occasions, and third three other times in WSOP tournaments.

It’s not the most impressive poker resume out there, but Devilfish was at or near the top of tournament poker for close to a decade, and until Super High Roller tournaments came about he was easily the UK’s top earner.

Certainly not everyone’s cup of tea

He’s ornery. He cusses a lot – A LOT. And he wears enough gold to qualify as the vice president of the Mr. T fan club. He can also be funny and charming. Basically, Dave “Devilfish” Ulliott is the human version of a polarized range.

Some people find him endearing and consider him an important part of poker lore in the UK. Others despise him as a loudmouthed bully and womanizer, and think he’s little more than a fish who cashed in on his image when poker exploded on TV.

One of his biggest naysayers is another polarizing figure, Tony G, and the two have had several televised spats:

All that being said, I don’t think Dave Ulliott would want it any other way, after all, what’s life without a bit of controversy?