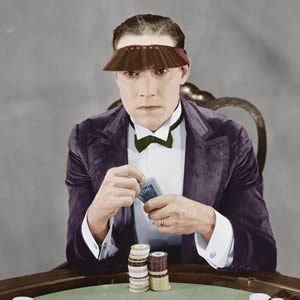 Great Moments in Poker History: The Poker Player of the Year

For example, you have the major ranking systems: Card Player Magazine, Bluff Magazine (which features six separate categories), the Global Poker Index, and now Poker News Daily all awarding a POY title. You also have the individual tours and tournament series handing out POY hardware: The World Series of Poker, the World Poker Tour, the European Poker Tour, the Heartland Poker Tour, and so on. Hell, even my regular home game, the Rock Ridge Poker League, has a championship trophy.

But it wasn’t always like this. In fact, prior to 1997 poker didn’t have a Player of the Year award.

While the Player of the Year award doesn’t necessarily reflect who the top poker player is (cash games are impossible to track, and the POY systems have all proven to be somewhat flawed), what it has done is bring some legitimacy and a new marketing angle to tournament poker. It was a way for poker to showcase skilled players (Player X has been in the Top 5 on the POY list for three straight years) and a way for TV producers to hone in on what would otherwise have been anonymous players at the beginning of tournaments.

And as poker grew in popularity it also gave players something to shoot for, a reason to attend as many tournaments as possible, especially if you had the chance to become the POY and land a sponsorship deal.

Suddenly, poker players had a way to keep score with one another, and it all started with Card Player Magazine.

In 1997 Card Player Magazine (which was still owned by June Field at the time; Barry Shulman would purchase the magazine in 1998) came up with the idea to track tournament results and crown the person with the best results as Poker’s Player of the Year.

Card Player kept the process fairly simple, awarding points for final table appearances and place, as well as adding few modifiers for buy-in and such over the years.

Here is a look at the Card Player POY winners over the years:

Card Player had a monopoly on the POY award until 2005, when a rival magazine that sprang into being at the beginning of the poker boom, Bluff Magazine, decided to challenge Card Player as the de facto POY outlet. The magazine (created in October 2004) unveiling their own Player of the Year formula in 2005.

Bluff’s formula is markedly different from Card Player, as it also takes into consideration a player’s results from the previous year and expands points beyond the final table, an improvement on the relatively simple formula of Card Player Magazine.

It took a couple years, but eventually the poker community decided Bluff’s formula was superior, and the Bluff POY award gained in credibility.

Here is a look at the Bluff POY winners over the years:

Bluff created competition in the poker POY sphere, but it was the Global Poker Index (oddly enough, an entity that wasn’t originally designed to be a POY ranking system) that revolutionized it.

The GPI formula was far more complex than any of the others, and it addressed several of the concerns players had been voicing about the other POY systems, namely that they rewarded quantity over quality.

Here are the winners of the GPI POY award:

The GPI’s emergence forced the other POY entities to restructure their own formulas, and as you can see there is now more of a consensus between the awards (Colman swept the POY awards in 2014, and Negreanu was two-for-three finishing 2nd in the GPI in 2013).

Will you be the next Poker superstar Player of the Year? Why not begin your journey by joining a top quality poker site right now. Click here to get 10 free at Sky Poker to begin your quest to be the best!