When it comes to casino games, fruit has had a long history in this particular industry. Indeed, 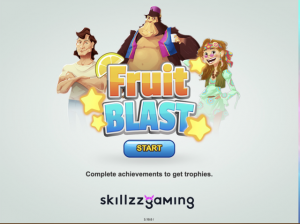 for a long time, the most popular of all casino entertainments, the slot games, was known colloquially by many as ‘fruit machines’ due to the fact that many symbols in these games were based on fruits such as cherries, melons, lemons, grapes, apples, oranges and similar.

Their popularity in games remains the same in the modern day and while we may use the term slot games more commonly nowadays, there are still games that have a fruity element to them. And the exciting thing is for players is that it is not just on slot games. One popular option available at top class casinos is the unusual Fruit Blast game, which has echoes of some of the most popular social media games you can play today.

There’s no better place to play the Fruit Blast game than at the hugely popular bet365 Games. Not only do new customers get a fantastic value deal when they sign up with the latest bet365 Games New Customer Promotion, but they have a superb choice of games to pick from when they play, as well as access to all the other fantastic sites that are part of the bet365 family.

However, if you live in a part of the world where you can’t access bet365 at the moment, such as in Pennsylvania in the United States, then you may find similarly engaging games to play at new sites available in the state thanks to new legislation. To get the best deal when you join, the latest playsugarhouse promo code will help you land a great deal as well as signing you up with a premiere operator in the state.

Let’s now learn a bit more about the Fruit Blast game and how easy it is to play, as well as some of the hidden features that the game also has that many not be at first apparent. 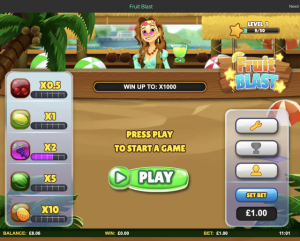 tiles together, on a 5×5 grid. When you do and click on them, the cluster will disappear, the number of tiles you landed in the cluster will be recorded and then the space created on the reels will be filled by other tiles dropping down from above and new tiles being added to the reels.

In order to land a win, you need to collect at least seven tiles of the same type of fruit. There are five different fruits available in the base game and each has a prize available to be won for collecting seven tiles of that fruit.

Clusters start at three symbols and can include symbols connected horizontally or vertically on the reels (but not diagonally). You can have any number of symbols above three in a cluster.

As you remove clusters from the reels, the tiles you are collecting are recorded and if you collect enough, you will trigger a payout on the fruit that you have collected enough of at the multiplier rate outlined above.

The good news is that every time you collect a group of seven of the same fruit, you land another win on that fruit. So, for example, if you were able to collect 21 of the grape tiles, then you would actually win three times with that fruit, offering you 3 x the standard 2x payout (so a 6x pay out).

Additionally, you can collect enough of different types of fruit to trigger more than one win across the types of fruit available, so for example if you landed a pineapple and a grapes win, then you would receive a total of a 12x pay out based on your initial bet.

That initial bet can be as little as £0.80 but can be increased well beyond that to suit the budgets of higher rollers, which makes Fruit Blast a game that can be played by all punters regardless of the size of their bankroll.

Once you have reached a point in a game where you do not have any more clusters available on the grid then the game will end. This can be relatively quickly into the game (and see no win) or it can happen after a few clusters have been generated and perhaps a payout achieved. In general terms, the longer a game of Fruit Blast lasts, the more chance you have of a better value win.

There are some other features on the Fruit Blast game, some cosmetic enhancements, such as 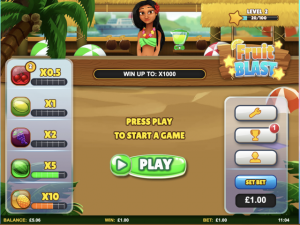 At certain levels a bartender will become available and the bartender you select to be at the bar will determine which of the bonus features you can trigger by landing three of the bonus symbols together on the grid.

There are eight different bonus games in this section:

As you progress through the bartenders and unlock each bonus game, the potential rewards on offer in each game increase in value, or offer you a better chance of landing a sizeable win, so it is worth trying to unlock as many of the bartenders in the game as you can.

In addition to this bonus, you may also land a cluster of Jackpot tiles on the main grid. When this happens, you will win a cash prize that is the base game jackpot of 1,000x your initial stake, so if you bet £1.00 on the game, then you would win a £1,000 prize.

Fruit Blast offers outstanding enjoyment for players of all abilities and it is a game that will have real resonance with those that enjoy social media games like Candy Crush Saga. Why not try it today and see if you can blast your way to a top prize?

Previous: Don’t Come Acropolis On These Great Greek Slots Available at Bet365 Games
Next: Stake Just £25 At Bet365 Casino To Get Free Spins Until March 8th