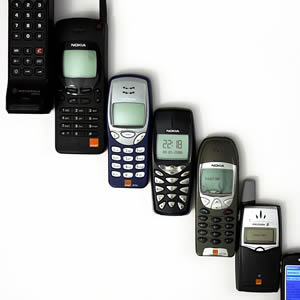 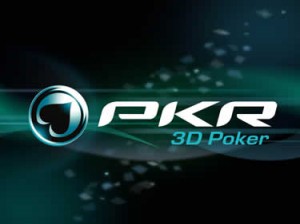 PKR have a number of different products now available for the mobile market, this includes a 2D version of the 3D Poker game reviewed here, as well as two other casino game options, PKR Roulette and PKR Blackjack – both of which are available in 3D.

The first thing to note here is that the 3D moniker attached to the title is somewhat misleading.

The site does not require the user to wear 3D glasses in order to get a true 3D effect. What it refers to is that instead of merely a 2D graphical representation of the game in terms of cards on a table top, the PKR3D software actually shows the players seated at the table and the actions they complete (such as putting chips into the pot).

All actions, such as dealing the cards, folding a hand, or betting is represented with an animation for each player, so that you see a virtual representation of a game of poker, not just the cards with the player names and icons next to them.

You can opt to play for Play Chips once registered but for the purposes of this review, we will focus on the Real Cash games. 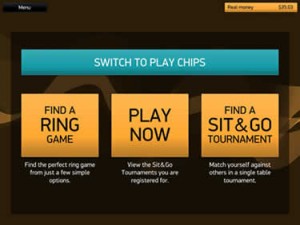 Access – Given a strong advertising presence, especially in the UK, the PKR3D and 2D apps are some of the easiest poker apps to find. They are downloadable from both Android Marketplace and the App Store as well as freely downloadable from the PKR website if you visit the site on your mobile device’s browser.

Games Available – There are basically three different types of games available on the PKR3D app. The first of these is a Ring Game, which is another name for a Cash Table. The second option is a Play Now game, which will set you up in a heads-up game against another player at the stated stake limit.  The final option is to find a Sit & Go tournament that you want to participate in against other players in a single table tournament.

Selecting the Play Now option will quickly load up a table, but if you select the Ring Game or Sit & Go option then you can further refine your selection by using a series of filters. These allow you to select the type of game you want to play, the level of buy-in you are happy to pay and lastly the number of seats you would like at the table.

Finding and downloading the app from a variety of sources is very quick and easy and a quick search for mobile poker apps or poker will bring up a list of apps.

PKR3D and 2D invariably end up somewhere near the top of those lists. Downloading is a snap and joining the site is also quick thanks to a simple, easy registration system, though entering some details can be slightly problematic when using the site on a smaller-screened device. 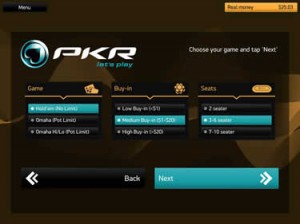 Entering your financial details and making a deposit is fast and painless, though it is notable that the many bonuses and offers for new players that are displayed prominently on the website are certainly absent in the mobile version of the game.

Why this is, we are not sure, nor is it clear if mobile-only players can gain access to these offers from their devices.

Once the software is running and you have cash in your account, finding your type of game and navigating across the site in general is very easy.

You can switch to play chips using the blue bar at the top of the home screen, while the three orange buttons take you to your game of choice.

Once you’ve found your game, you then get to see the best part of PKR3D, which is how the poker table is brought to life and this is what makes this app unique amongst mobile apps at present.

Unlike all other apps we’ve played, which only tend to show the cards, PKR3D shows the entire poker table with virtual players representing each of the online players.

Best of all, the virtual players are fully animated, so that when you call, or raise, you can see your player placing chips in the pot. There are even options for you to get your player to perform tasks while waiting to play, such as shuffling chips in their hand as you see many pro players do at the table.

When your player folds out of a pot, he sits back in his chair and when they go all-in, they also stand at the table. The cards are dealt by the table dealer who is also animated (although to be fair, the dealing / folding animation isn’t the greatest).

The use of animations throughout the game make PKR3D a very different experience to playing other poker games. The use of graphics does tend to slow the pace of the game down somewhat (which some users may not like) but which novice players may find particularly helpful as they have more time to consider their alternatives. 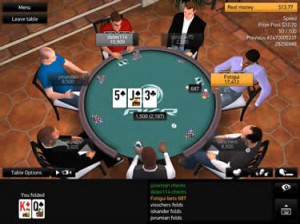 It doesn’t matter which type of poker game you play, the animations on each one are almost exactly the same – though you do have the chance to personalise your avatar in many different ways to ensure they look like you, or are at least different to the default option.

The fancy graphics would be an issue if the quality of the poker game suffered but on PKR3D it doesn’t. The quality of players and game is comparable with any other app you can download and all the vital ingredients of the game of poker are present.

What is missing however is a lack of multi table tournaments, so PKR3D is best suited to players who want to play single table Sit & Go games, Cash Tables or Heads Up poker.

There are lots of very positive aspects about PKR3D which makes it one of the stronger and certainly most innovative poker apps you can download for Android and Apple devices.

Some of the strongest points of the app include:

While there are many unique elements of PKR3D, there are several imperfections with the app which mean it doesn’t quite meet the highest standard in a few areas, notably:

While PKR3D may only have limited appeal, especially for more experienced poker players, or those who prefer to play for higher stakes, as an app for a beginner to learn about the game and develop their skills, PKR3D is an ideal app in this regard. 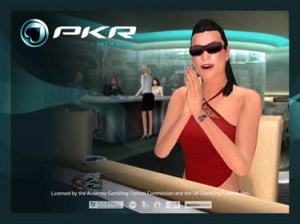 There is enough variation in games to keep people playing for a while as they progress and of course, the animation aspect of the table is a real novelty, especially when compared to other poker apps.

Yet it is worth looking beyond this to understand that PKR3D is a very solid poker product, there are a few issues with the app, notably the longevity and long term appeal and the lack of clarity about any introductory offers that new players may be eligible for, but overall, this is a very solid app with plenty of positive aspects which outweigh the negative.

PKR3D should be applauded for giving mobile poker a fresh perspective from simply the 2D card only games that most other apps have installed.

It was a risk, but it has paid off and this is certainly an app worth downloading, especially if you are a new player wanting to learn about the game.