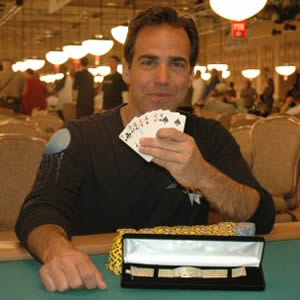 Famous Poker Stakes: The Rise of Sheets and Bax

There are very few things in this world that are as synonymous as “poker staking” is to “Sheets and Bax.” Eric “Sheets” Haber, and Cliff “JohnnyBax” Josephy aren’t just among the biggest stakers in poker, they practically reinvented the staking game during the Poker Boom.

Both players were considered to be solid poker players in their own right (Josephy is a two-time bracelet winner and has won millions both online and in live tournaments) before they saw the potential in staking and switched most of their focus to developing a stable of horses.

The rise of Sheets and Bax began in the midst of the poker boom when Haber and Josephy realized that the young talent dominating the online poker world would just as easily dominate the live tournament arena, except that these players lacked one simple thing to get them going: money.

At the time most online players simply didn’t have the money to handle the higher-buy-ins and rake that is prevalent in live poker, or the mammoth expenses needed to travel the tournament circuit, but this was a problem that Haber and Josephy had no qualms about fixing for these players.

Haber and Josephy not only had the vision to see the potential in the staking market, they were also in the right place at the right time to capitalize on their idea. Other then the apex of the poker boom you will never find another period of time where dozens upon dozens of young tournament poker players had ROI’s of 100%+. If Haber and Josephy were just a few years late to the ball, the chances of them being iconic in the poker world are closer to 0%.

They saw the way that these young online kids were already two or three moves ahead of the grizzled, older, live tournament grinders and they pounced. At first the old-timers saw this kids as dead-money, and anytime they won it was due to luck, so for a couple of years these young tournament wizards were mowing down fields in events with top prizes measure in the high six to seven figures. By the time the rest of the poker world caught on the damage was already done, and two of the biggest financial recipients were Sheets and Bax.

We might not know the specifics regarding most of their horses, but one of the most famous stakes the duo was involved in was backing Joe Cada in the 2009 World Series of Poker Main Event. Cada’s run to the WSOP Main Event title marked the second consecutive year that Sheets and Bax had a horse at the final table, as the pair had a piece of Ylon Schwartz the year before according to an ESPN.com article by Andrew Feldman.

Cada’s win was life changing for the 21 year-old, but it also stamped Sheets and Bax credentials as poker backers, and confirmed that their business model was indeed a successful one –after Cada’s win nobody could argue otherwise.

Sheets and Bax didn’t just come up with the idea to back online players and set them loose on live tournament players, the duo also reinvented the way staking in poker was handled. Sheets and Bax turned poker staking into a business, not simply a way for players to help each other out during a bad run: Staking went from informal to formal during this time period.

Another change the duo exacted was that prior to Sheets and Bax most staking deals were heavily in the favor of the player –with the now ludicrous terms of “I’ll buy you into the tournament and we split the profits 50/50” commonly used. Sure, savvy backers of old utilized makeup and maybe even skewed the profit-sharing more in their favor, but it was during the heyday of Sheets and Bax that staking became more and more in favor of the backers (as it should be), and turned into a business where profits were tracked and results mattered.

Sheets and Bax not only skewed the payouts towards the backers (the people taking the actual financial risk) but they also made terms like stakeback and makeup standard additions to any staking agreement. In 2013 you will never find someone talking about a legitimate stake without stakeback or makeup, unless they are willing to take a profit split of 30% or less.

The Myths and Legends

There are plenty of forum threads that like to guess at what Sheets and Bax made as backers, and while all of this is fun in theory, it’s nearly impossible to reckon what they actually made due to the incredibly high variance associated with live tournaments and the unknown aspects of who they stake and how big a piece they have. Theoretically, the difference between backing Jamie Gold and Paul Wasicka in the 2006 WSOP Main Event is about $6 million on its own: Or had Joe Cada finished in 8th place in 2009 that one tournament would have been a multi-million dollar swing for Sheets and Bax.

Some people will also say that the duo backs hundreds of players in every major tournament, but the real number is probably closer to the pair having 100 or so horses at any given time. Other people say that they stake so many people they can’t possibly turn a profit. Well, as anyone who has spent any time in the poker world knows, Sheets and Bax have put up some great results as backers. We’ll never know precisely how much, but I have the suspicion that the number would be jaw-dropping.

Perhaps the most comical Urban Myth regarding the staking pair was that they were “ratted out” to then New York Attorney General Eliot Spitzer back in 2005, and would be going to the hoosegow. As silly as this post is, it is one of the top Google results for “Sheets and Bax” if you can believe it! In fact, most of the top results for the tandem are goofball threads like this, because the real Sheets and Bax stories are private. Maybe one of them will write a book someday…

Looking for a boost to your own bankroll? Grab a Bet365 Poker bonus code and get $5 free with no deposit required.