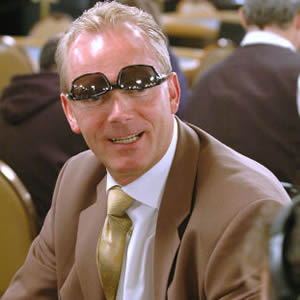 Serenading opponents at the tables. Check

Throw all those things together and you have the one of the most important European poker players of all-time, Marcel Luske.

But these are only the basic ingredients. There is a lot more that goes into being Marcel Luske than these somewhat easily duplicated traits. What makes Marcel Luske Marcel Luske is what’s on the inside, and that can’t be imitated.

In my mind, Luske is a Hall of Famer. Unfortunately, he is often overlooked because of the lack of major tournament wins on his resume, and his dominance at the poker tables only lasted for about half decade. Luske did land on the Hall of Fame shortlist in 2011.

Even in his short amount of time at the top Luske did more for European poker during the early stages of the poker boom than perhaps any other man or woman. To this day Luske is a great ambassador for the game, both in his roles as a mentor for younger players and his work with the International Poker Federation, the organization he heads in his quest to get uniform rules installed in poker rooms and across the myriad of poker tours.

Luske’s personality and results made it a no-brainer for PokerStars to sign him as a Team Pro, a relationship that lasted until he and the company parted ways in the fall of 2014.

The most amazing part of Marcel Luske’s rise to fame is that he was just getting started in poker when the poker boom hit in 2003. What’s amazing about this is most people think Luske was a grizzled veteran when he was featured on the 2003 and 2004 WSOP broadcast, where he pulled a mini-Dan Harrington, finishing in 14th and 10th place respectively.

Luske picked up poker just before the poker boom (in the late 1990’s), and didn’t “go pro” until 2003. Yet Luske’s persona was of the savvy veteran, a testament to his innate poker skills.

He was also one of the first poker players who was able to “sell” himself to the TV cameras, a feat made all the more astonishing when you consider Luske is from Europe and although he speaks perfect English it’s heavily accented – perhaps the singing helped.

The Flying Dutchman as he is known in poker circles, is the Netherlands all-time leading tournament money winner according to the Hendon Mob database. He’s also a former PokerStars pro with a pretty impressive online poker resume.

Luske has amassed over $4.4 million, and what makes this all the more amazing is Luske’s largest cash was the $373,000 payday he earned for finishing 10th in the 2004 WSOP Main Event.

Who else in poker has over $4 million in career earnings without a WSOP, EPT, or WPT victory?

Luske had 31 cashes in 2001. 31! I didn’t even know there were 31 poker tournaments in 2001. Furthermore, he won nine of those tournaments, which explains why he was the European Poker Player Of The Year in 2001 at the first European Poker Awards ceremony.

Luske won the European Player of the Year award once again in 2004, when he capped off yet another terrific year with his 10th place finish in the WSOP Main Event, and garnered a ton of airtime on ESPN thanks to him being a known, and easily recognizable face thanks to his 2003 WSOP Main Event run that ended in 14th place.

Like I said, there aren’t a lot of major tournament victories on his resume, or the singular defining cash that so many poker careers are built on. What you’ll find instead is consistency. The man was a cashing machine for several years and won more than his fair share of events – 33 by my count.

Luske has also done a bit of damage at the online poker tables, with his biggest online score coming when he won the PokerStars Sunday Warmup in December of 2012.

You can find out more about Marcel Luske and his current advocacy for uniform poker rules at his blog.

Could you follow in the footsteps of Marcel Luske? Why not try by joining Bet365 Poker today? Sign up now and get a Bet365 no deposit bonus in the process.