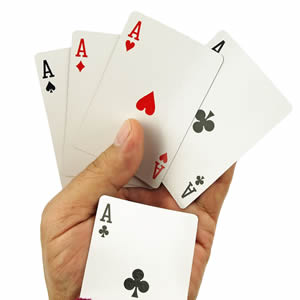 Employing proper strategy is a must no matter what variation of poker you like best. Here, we focus on a few key strategy points you need to know when you’re playing 5-card omaha.

If you are looking for a site, check out bet365. Don’t forget to grab a Bet365 no deposit bonus code before signing up a new account.

People tend to assume that the more hole cards you get dealt, the more the action you have. To an extent, this is true.

Weaker players play more hands because they see more possibilities in those hands.

But for any decent players, being selective over starting hands is still of utmost importance. Therefore, the amount of hands played in 5 card omaha strategy shouldn’t different too much from regular omaha. You should still know when to fold’em!

As a general rule, try to stick to Group 1 pairs, and avoid Group 3 pairs. With Group 3 pairs, there is simply too much risk that your (hopeful) set will be beaten by a better set.

Group 1: AdXdAsXsX; AdXdXXX – single and double suits to the ace

Good suited hands have two cards of a suit including the ace, making nut flush draws vs lesser flushes possible, with you obviously holding the stronger of those two. Group 2 hands are just about playable, with the nut flush draw a little less likely to hit in both cases.

With Group 3 flush hands, there really is no merit in playing them because all you are doing is exposing yourself to the reverse implied odds of hitting your flush but being up against a better flush.

Group 3: 4567x or lower; any wrap with 2 gaps or more – vulnerable wraps that should be avoided as a general rule.

The best starting hands have a combination of the above. Ideally, you would have a hand that falls into two Group 1s, or a Group 1 plus a Group 2.

But try to make sure that at least four of the cards are working together somehow. A mini combo, if you will. For example, QQT9X. So the QQ is your group 1 qualifier, but the T9 adds a little extra power with the straight possibilities.

If your wrap hand doesn’t contain an ace, then you are really looking to have one of two things. Either the top end of a particular straight draw, or a combination of a straight/straight-draw and two paired cards to give you a redraw. Say if you hit the straight on the flop or the turn, this is still pretty vulnerable in 5-card Omaha.

Having a redraw to a full house adds an extra safety net, either by you hitting the full house or by your blockers lessening the chance of someone else hitting one.

These sort of hands, where a backdoor draw comes in by the river, are relatively commonplace in 5-card Omaha. So don’t become completely married to your hand when you see a good flop.

Sometimes you need to sigh and give up on it by the river if a potential backdoor draw comes in and your opponent seems to like it. The best way to protect against this is to bet the flop more frequently, resisting the urge to slowplay hands. And then look to bet the turn heavy to make any drawers pay a big price for the draw.

If you have a hand with two Group 1s, or a Group 1 and a Group 2, then you should always raise preflop. Your main aim is to build the initial pot to a size that becomes attractive and likely to lead to much more expensive floats and draws when the action gets to post flop.

You have a strong basis from your starting hand, so if you hit the flop, your hand has a good chance of being the nuts or drawing to the nuts.

If someone 3bets against you, then make sure you have at least AA with half combo, or a strong overall double Group 1 combo before committing to further pre-flop raises. If this doesn’t apply, be prepared to just call and to re-evaluate on the flop, effective stack sizes permitting, of course.

If you’re curious about the combinations and the chances of them paying out, check out a 5 card omaha odds calculator (scroll to the end for the full details of how to use it!).

With a flush draw, you are almost always looking to hold the nut flush draw to the ace. Drawing to anything less is really a recipe for disaster, unless you’re playing a very loose opponent. If you have a weaker flush draw, make sure you hit at least top two pair. That way, your flush cards act as blockers and your two pairs have a reasonable chance of holding against a nut flush draw.

Be a bit wary of potential straight-flush draws too. The assumed ace “nut” flush might not be the nut, so keep you eyes well and truly open. On the flip side, this can be a good way to really trip up an opponent.

Some Group 1 or 2 wrapable cards with a couple of suits always have the potential (albeit slim) for a straight flush. They can get an Ace-high flush to stackoff as a loser, or at least contribute a very large amount to the pot.

If you have just a straight or straight draw, then make sure your cards make up the top end of the straight, extending it fully. The low end is a recipe for disaster, and even one card off the high-end is likely to cost you a lot in the long run. For example, with 67A8 on the board, having a 5 and a 9 really isn’t that good at all.

What you need is something like 9TJxx. That way, you have the full extended top end of the straight, but retain the nut straight if a 9, ten, or jack comes on the river. Be a little careful when flush draws present, and try to hold some blockers to the flush if you are going to stack off hoping the straight will hold. They can also act as a redraw if up against a player with the same nut straight.

If you hit a set, make sure it’s the top set (with no flushes or straight present) before getting overly invested in the pot. Bet it hard so that those on a draw will have to pay significantly to see any more cards.

To see what we mean, it’s always useful to have a 5 card omaha calculator in your back pocket. More on that below…

We get that it can be a little confusing when you start playing a new variant to figure out how exactly the odds work. And that’s why it can be handy to use a 5 card omaha odds calculator.

All you need to do is choose 5-card omaha from the Game drop down. Then enter what’s on the board, if anything, along with the hands you’re curious about.

When all the info is entered, press Simulate. Then you’ll get your equity percentage, along with how many wins and ties are possible.

Trust us, this 5 card omaha calculator is bound to come in useful both when  you’re a newbie and when you’re a seasoned player.