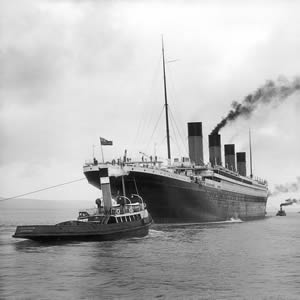 Calling Titanic Thompson a poker player is a bit like calling Jim Thorpe a runner.

Titanic certainly played enough poker and won enough money (mostly by nefarious means) to qualify as a professional poker player, but he was first and foremost a gambler.

However, it was a poker game that thrust him into the national spotlight and led to the bastardization of his surname.

The legend of Titanic Thompson

Born Alvin Clarence Thomas near the Missouri/Arkansas border in 1893, the man who would later be known simply as Titanic (because he sinks everyone) or simply Ti, started off life with nothing but went on to become the most famous gambler of his time, and was the inspiration for Damon Runyon’s quixotic gambler Sky Masterson in the well-known play Guys and Dolls.

Among Titanic’s many talents were shooting (targets and people), golf (playing with either hand), manipulating cards, and setting up and selling a bet.

He was a man ahead of his time, as Titanic Thompson worked out the math (not himself as he could barely read or write, but through a math professor he hired) of anything and everything gambling, from the infamous birthday bet to the odds of filling certain poker hands, and would practice random “tricks” and feats for months and years to setup a bet.

Titanic could count Minnesota Fats and Nick the Greek as friends and partners, and could count famous celebrities and athletes as his marks, and even someone named Al Capone.

What made him the greatest gambler of all time was, if Titanic couldn’t beat you fair and square, which he often could, you could bet your last dollar (which people often did) that he’d hustle or cheat that money out of your wallet.

Another Titanic “mark” was Arnold Rothstein.

Arnold Rothstein, the man who fixed the 1919 World Series (the actual World Series not the World Series of Poker) was killed over gambling debts stemming from a poker game whose lineup included Titanic Thompson, along with several known associates of Titanic.

Rothstein, a bookie and all-around not so nice guy, ended up playing in a Stud Poker game arranged by George “Hump” McManus – another not so nice guy.

In a stunning bit of irony, Rothstein convinced Titanic to be his partner on their way to the game, and partner in those days meant they would cheat together. And partner they did… until Titanic’s real partner Nate Raymond (who has an utterly deplorable nickname) turned up.

With Raymond now in the game, Titanic dissolved his partnership with Rothstein under some false pretenses, and unbeknownst to Rothstein partnered not only with Raymond, but also enlisted some of the other players in the game to help the pair fleece Rothstein.

Rothstein lost in the neighborhood of $500,000 in the game (most of it in the form of I.O.U.’s), and by the time he grabbed his hat to leave was well aware he had been taken, saying, “I think some of you play cards with more skill than honesty,” according to Kevin Cook’s book, Titanic Thompson: The Man Who Bet on Everything.

In the end Rothstein refused to settle the debt in a timely manner, knowing he had been cheated, and this decision would eventually cost him his life, as he was gunned down two months after the game, on November 4, 1928. Rothstein didn’t die right away, but he refused to divulge who had shot him, saying, “I won’t tell.”

All of the gamblers from the poker game appeared in court, including Titanic, who somehow had his name recorded as Thompson instead of Thomas by the newspapers. In the end nobody was convicted of killing Rothstein, and Titanic became an overnight sensation thanks to his witty remarks, youthful looks (the newspapers estimated his age at 26 even though he was 37), and his natty attire.

One gem uttered by Titanic in court was:

Q: Is poker a game of chance?

Titanic: Not the way I play it.

When asked about his penchant to gamble large sums of money he shrugged it off saying he plays golf for a little bit of money, and that he has a hard time remembering things like that.

The trial turned out to be the biggest story of the day, garnering more headlines than the ongoing stock market crash, and thanks to his typical strokes of luck, Titanic’s name had been misreported, allowing him to avoid certain types of unwanted prying into his past and life.

Interestingly, it was Rothstein’s death that led police to find the receipts for payments to White Sox players, and had he not crossed paths with Titanic Thompson and his colleagues, baseball’s biggest black eye may never have come to light.

All that, because of a little game of poker in a hotel room.