Home > Around Online Poker > Why Not Try Your Hand at the Wheel of Wishes Slot for a £2m Prize? 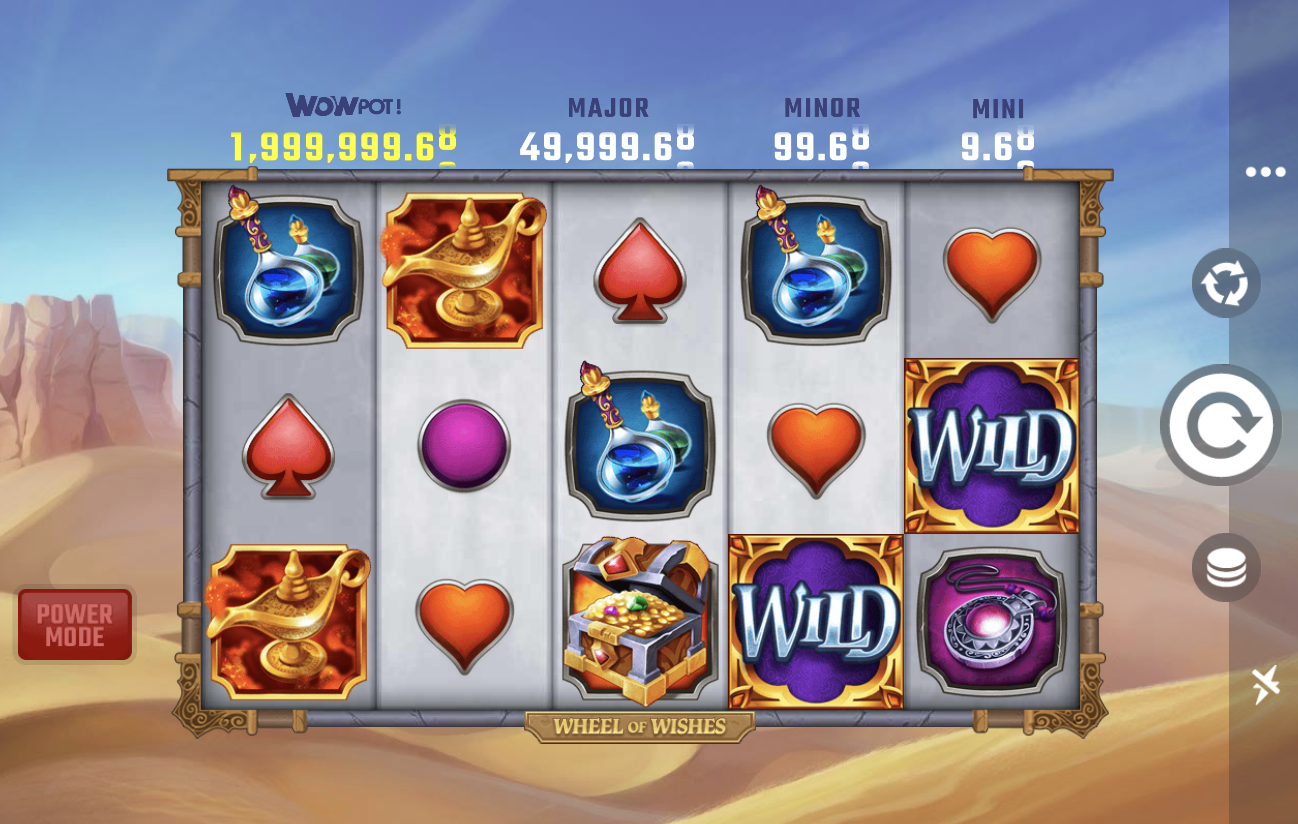 of Wishes progressive jackpot game. The first new progressive from Microgaming (or more accurately, its partner company Alchemy Gaming) since the release of Mega Vault Millionaire last year (which is available only at Casino Rewards Network casinos) this new game is based on the older Wowpot slot progressive.

The Wowpot slot featured a relatively small progressive jackpot prize, but it has since been put to a different use and with a much greater value in the new Wheel of Wishes slot. Now the Wowpot jackpot will stand at a minimum of £2 million, double the amount that the top progressive jackpot prize at present, Mega Moolah, offers as a seed amount and of course, this has sent waves rippling through the online slot community.

progressive slot, then there is no better way than by signing up at a quality site that offers Microgaming slots, as well as plenty of other progressive games from other companies. To do that most profitably, check out the current bet365 Games New Customer Bonus on offer on the site at the moment, which will give you a nice additional bonus when you sign up on the site.

Unfortunately, bet365 isn’t available on states where gambling is legalised in the USA at the moment, but there are some other options around for players in certain states. In Pennsylvania for example, you can take advantage of the new relaxed laws surrounding online gaming by checking out the latest playsugarhouse promo code deal in the link, which will help get you started at a top quality online establishment if you are based in Pennsylvania.

Let’s now take a closer look at how the new Wheel of Wishes slot shapes up.

Wheel of Wishes – Theme and Presentation 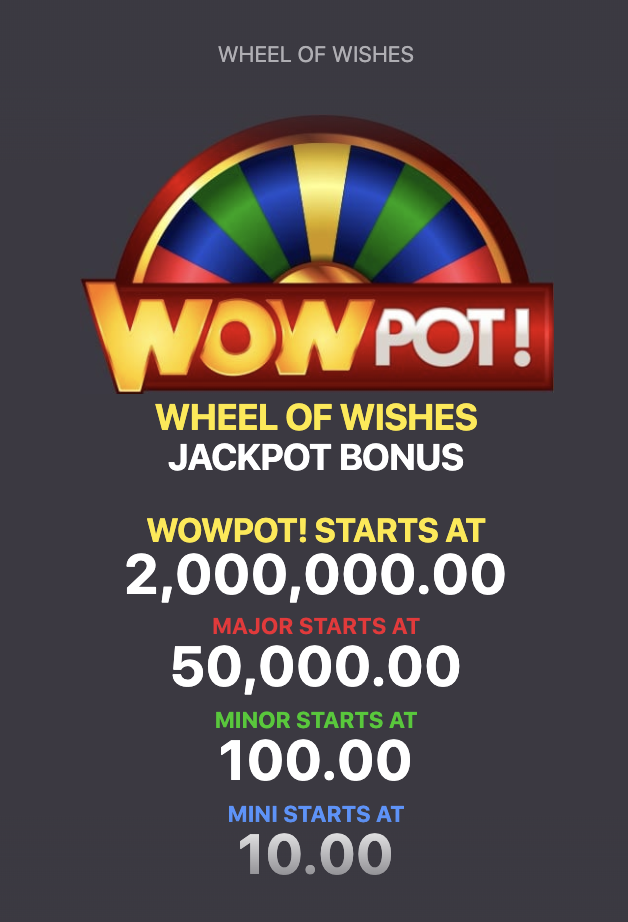 The backdrop and sounds are all based on the Arabian theme too with some nice sound effects and music accompanying you as you play, while the desert backdrop for the base game is easy on the eye. The main controls of the slot are on the right-hand side of the reel. The one exception to this being the Power Mode option, which we will explore more about in the sections below.

At the top of the reels are displayed the four different progressive jackpot prizes, these are (ranging in size from lowest to highest), the Mini, Minor, Major and Wowpot jackpots.

The Wowpot jackpot is seeded at £2,000,000, with the Major jackpot seeded at £50,000 and the Minor at £100 and the Mini at £10. As you play, you will see the values of each jackpot increase and you may even see when the Mini and Minor jackpots are won (as they will reset back to the seed amount if the jackpot is claimed while you are playing the game).

The Power Mode Scatter symbol is the other feature symbol of the slot and this too can appear on any of the five reels and if you can land three or more across the reels, then you can win a cash prize of up to 500x your total bet, which is a considerable sum of money.

Furthermore, if you land two or more of the Scatters then you will trigger one spin in the Power Mode which is the key to unlocking a chance at landing the progressive jackpots available in the game.

One thing to note here is that you can elect to play in Power Mode, by clicking the red 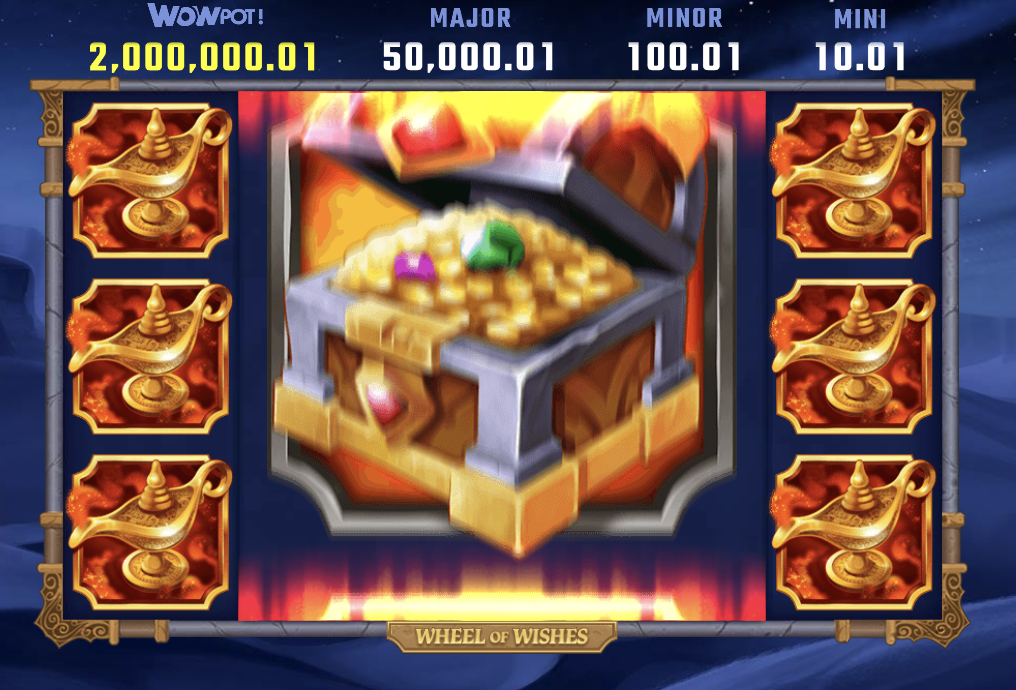 Power Mode button to the left of the reels. When you do, this switches the game into Power Mode for all your spins, but the cost of the spins increases to 10x the standard bet. So this means if you are playing for £1.00 per spin in the base game, a Power Mode bet at the same rate would cost you £10 each time.

Of course, that makes this mode much more expensive, but the benefit of that is each spin you have on the slot could be the one that triggers the Jackpot Bonus Game and when you trigger that, you stand a chance of landing one of the four progressive jackpot prizes.

During Power Mode, the first and fifth reels will show at random one of the symbols on the reels (except the Wild) and the middle three reels combine into one large reel, complete with 3×3 symbols on. If you match symbols on the outer reels with one or more rows on the middle reel, you can win some sizeable prizes, especially if the whole symbol matches.

Land the Scatter symbol in full on that big middle reel however and that is how you trigger the Wheel of Wishes Jackpot Bonus Game.

Once triggered, you will be taken into a cave laden with gold and on the screen you will see a wheel. On the wheel are different sectors that are coloured to correspond with the four progressive jackpot prizes. There are obviously more sectors of the lower progressive prizes, than the higher value.

All you do is simply spin the wheel to reveal which of the four progressive jackpot prizes that you have won, with the sector that comes to rest next to the pointer deciding which of the prizes you have landed.

With such a huge jackpot prize, the Wheel of Wishes slot is going to be a smash hit success with players when it is released in early 2020, so remember to sign up now to ensure you are ready to play this brand new slot from day one.