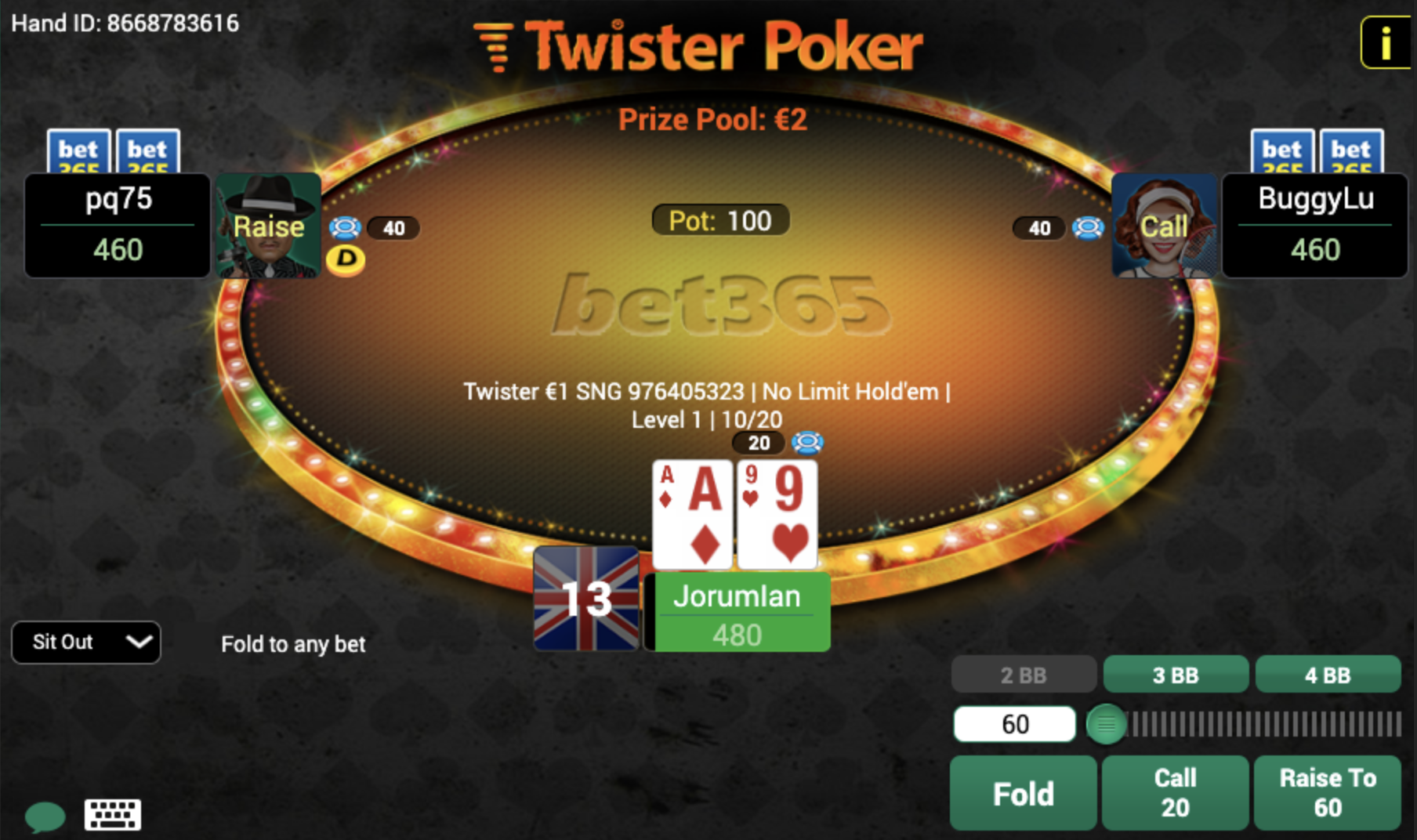 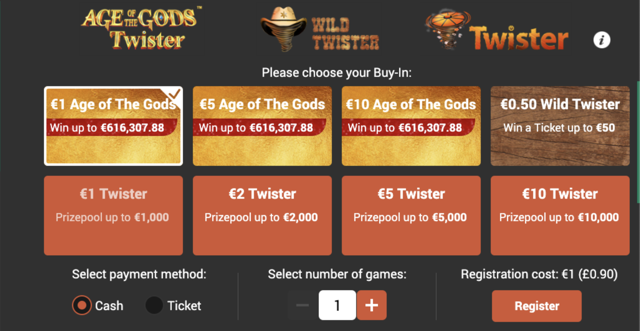 at bet365 Poker so we have decided to rectify this right now with a look at one of the most popular forms of the game you can play on the site, Twister Poker.

The game is a perfect choice for poker players who may not have the time to sit down at a table game, or enter a tournament, and play for a lengthy period of time to either build their balance, or work their way through to the latter stages of a tournament to reach the cash prize positions.

Designed for players that want a challenging but quick poker fix, Twister Poker games can be played for a variety of costs and are usually over within a couple of minutes or so of starting, with some of the newer types of game being even quicker to play. Let’s begin our look at the game and its strategy by looking at the types of Twister Poker available at bet365 Poker now.

If you are based in the United States, remember you can play poker online in Pennsylvania at PlaySugarHouse. Check out the latest playsugarhouse promo code for details on the current starter bonus for new players on the site.

What Twister Poker games are available at bet365?

It seems strange to think that Twister Poker games were originally going to be just a short term promotion on the bet365 Poker site, however they proved to be so popular with customers that the company have left them up ever since and even added to the number of games that you can now play,

Alongside the seven standard forms of Twister Poker, you can also play three Age of the Gods themed versions of the game, which are linked to the Age of the Gods progressive jackpot prize (which currently stands at over €616,000). There are three versions of this game to play with buy ins of €1, €5 and €10 available.

There is also a Wild Twister option which is the cheapest option for just €0.50 per game. However, this is an incredibly quick form of Twister Poker which can see the game decided in just a one hand usually, although in some games it may require a second hand to decide the winner (all players in the hand are placed all in before the deal). You can win from 2x up to 100x your bet in this game.

Occasionally, bet365 Poker may run promotions that offer players the chance to earn tickets to play Twister Poker and these can be selected as a form of payment for your game, if you have any of those tickets available.

Which of the Twister Poker games should I play?

The Age of the Gods variant of Twister Poker sees you with a small initial stack of just 200 coins, and 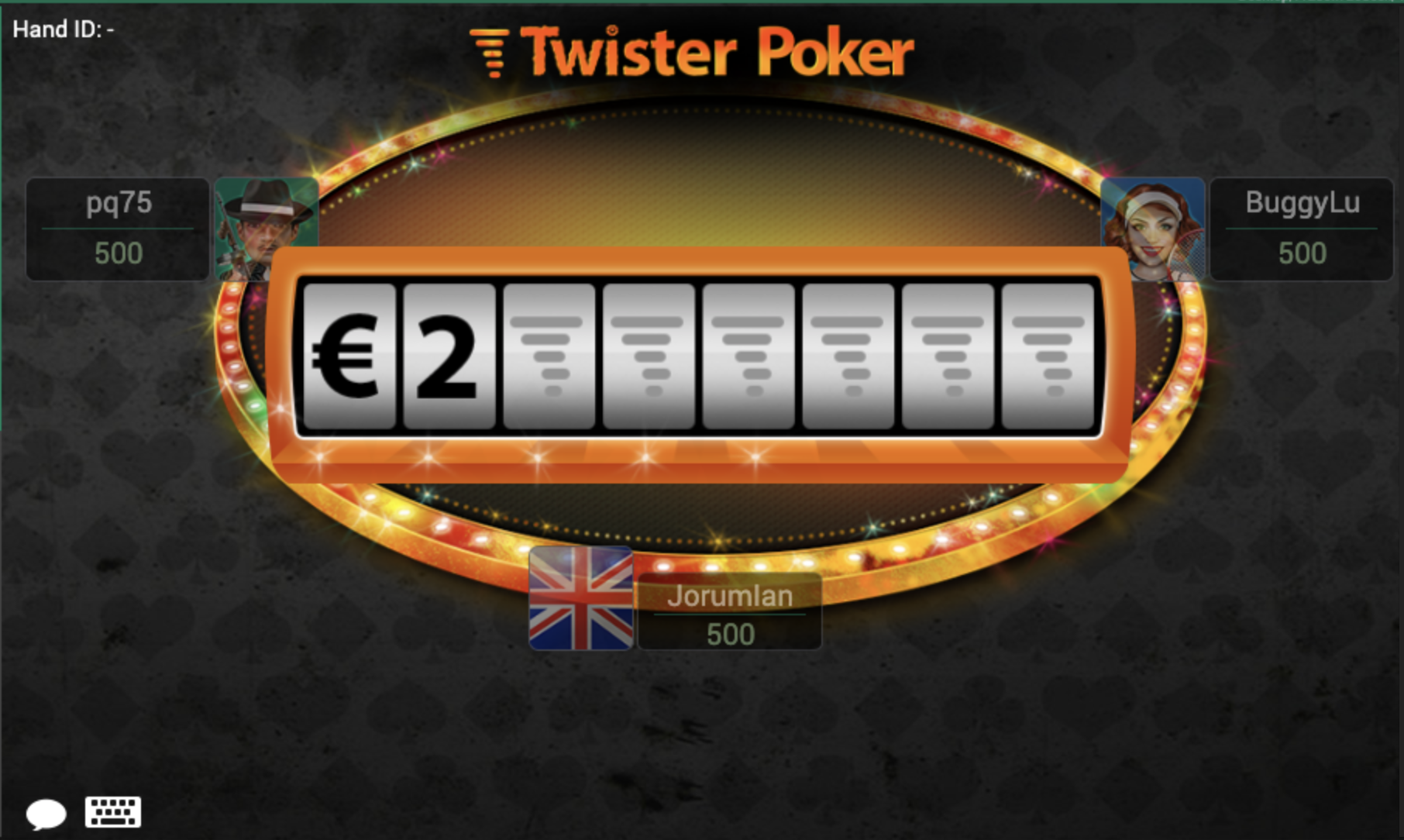 these can quickly disappear. If you like quick games then Age of the Gods is a good choice and it also has the added attraction of having those progressive jackpots available.

The Wild Twister option is even quicker but there is no skill involved in this game. Each player is placed all in and whoever has the best hand when the cards are all dealt one after the other is the winner. As such, if you want a skill element to be at the heart of your Twister Poker experience, rather than just a random game, then Wild Twister, though the cheapest option, may not be the best choice.

The original Twister Poker is definitely the game that gives you the best chance to let your poker skills do the talking. Even so, you don’t usually have a very lengthy amount of time to win a game. With the blinds increasing rapidly, your stack of 500 coins doesn’t tend to last too long, especially when you are paying either the small or big blind on 2 out of 3 hands initially.

However, in the original Twister Poker there is much more scope for your poker abilities to come to the fore and as such, if this is the aspect of the game that appeals to you the most, then this is the version of the game you should play.

What are the best tips to follow when playing Twister Poker?

The first thing to note is that in Wild Twister, no skill element is involved and in the Age of the Gods 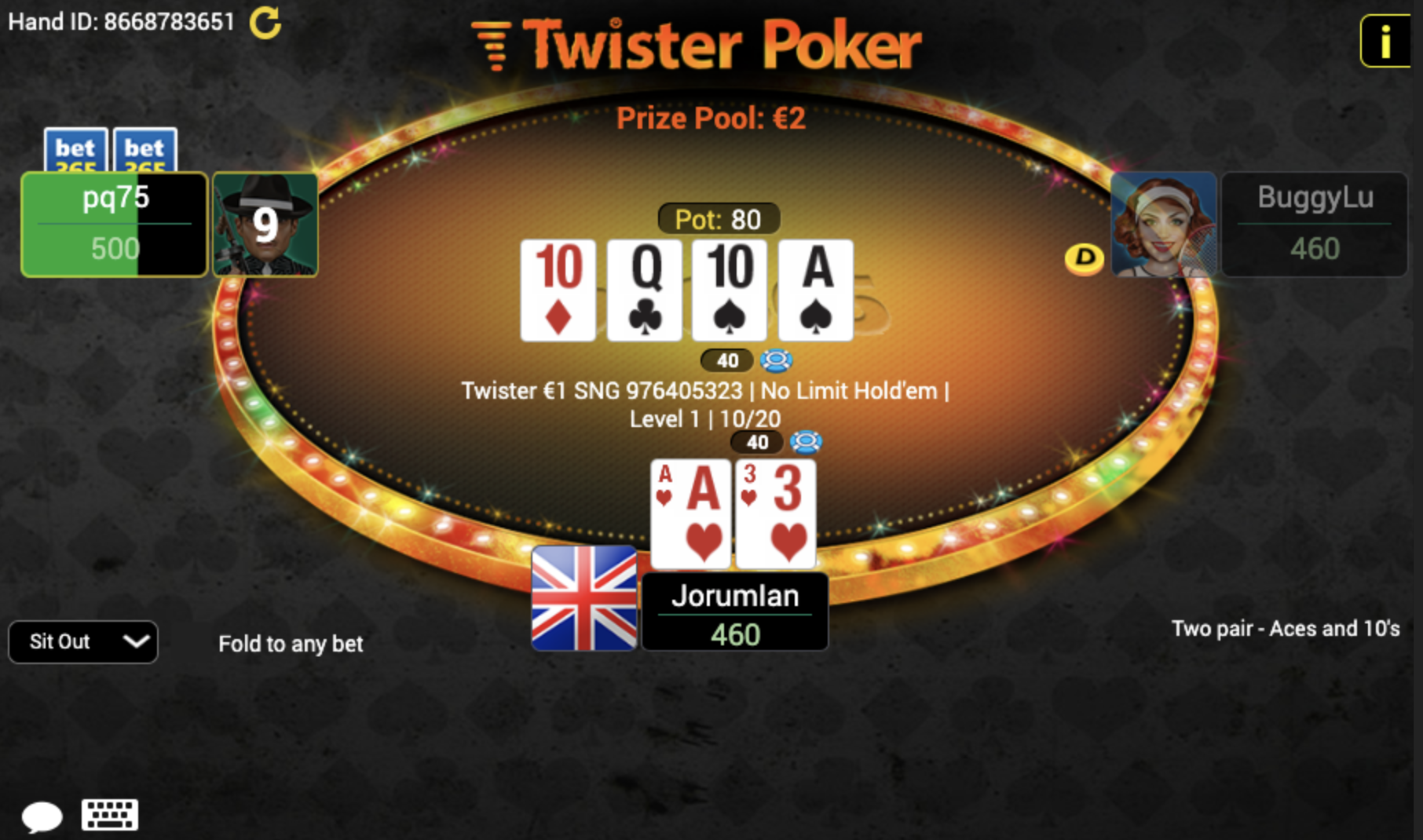 progressive versions of Twister Poker, your stack is so small that you are generally forced to play a certain way (fold when the cards are not with you, go all in when they are). However, the original game of Twister Poker with its starting stack of 500 coins does offer far more scope for you to play to a certain strategy.

As with most games of poker, position is the key particularly at the start and if you have not made one of the blind bets, and your cards are not great, then folding is a wide option at this point. However, if you have put money into the pot and nobody has made a continuation bet, or raised heavily, you can maybe look towards bluffing your way to a win.

Representing a bluff has to come at the right time, go all in too soon and in a way that makes your move look somewhat dubious, and you could find your bluff called. Remember too that other players may deliberately slow play a strong hand to draw the bluff and then call it. Indeed, this is a very common strategy that better players will use to sucker in players who are not strong on the bluff.

The size of your bankroll is key in Twister Poker and if you get in a strong position in the game, you can use those extra chips to bully opponents, especially when you have paid the big blind. Even just a bet of 40 to 80 chips may be enough to induce a fold from an opponent with a much smaller stack.

With just two or one opponent, single card values are also more pertinent in Twister Poker, which is why players will play with hands of low pairs, or even high card values. Strong pairs in the hand will almost always see a player fully commit to a pot and this is generally the strongest play.

You have much less time to begin to read opponents in Twister Poker and with your opponents likely to change from one game to the next, it is not really an effective strategy, but it is possible to identify fast and loose players from how often and quickly they bet together with the amounts. These players will try to bully folds from other players, but they can also overcommit to hands and be taken out relatively easily by a skilled player.

Twister Poker is a very enjoyable way to play poker if your time is limited and with so many options now available, it is easy to see why it remains one of the top games available at bet365 Poker.