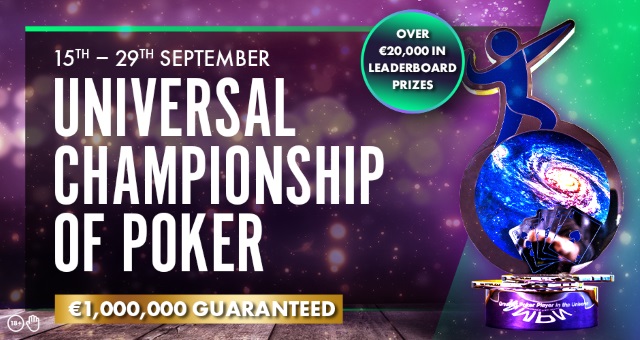 The Universal Championship of Poker 2019 begins this September 15th and runs through September 29th. Over two weeks, the series will host 94 tournaments and guarantee €1 million in prizes. In addition to the huge prizes available this September, MPN is also holding a €20,000 Leaderboard as well as a Tournament of Champions that collectively will add an additional €25,000 in value to the series.

While the UCOP doesn’t get underway for another two weeks, starting yesterday players can begin to qualify for UCOP events through satellites through much of the rest of the month.

What is the UCOP?

MPN will hold its latest version of the popular tournament series from September 15 to 29 with €1 million in prizes guaranteed throughout the series. Over the two weeks, MPN will hold feature a diverse mix of tournaments with buy-ins ranging from €2.20 to €320. Each day of the series will consist of at least five events with even more scheduled throughout the weekend. The series will be dominated by No Limit Hold’em events, but you will also be able to find some Pot Limit Omaha events mixed among the schedule.

Throughout the two weeks, a large selection of tournament styles will be available including rebuys, freezeouts, deep stacks, super bounties and boosters.

See below for a full schedule of the festivities. 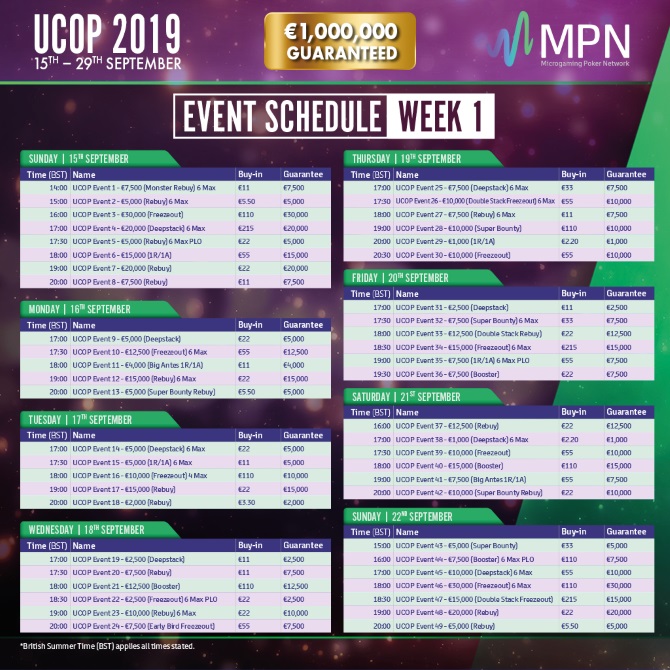 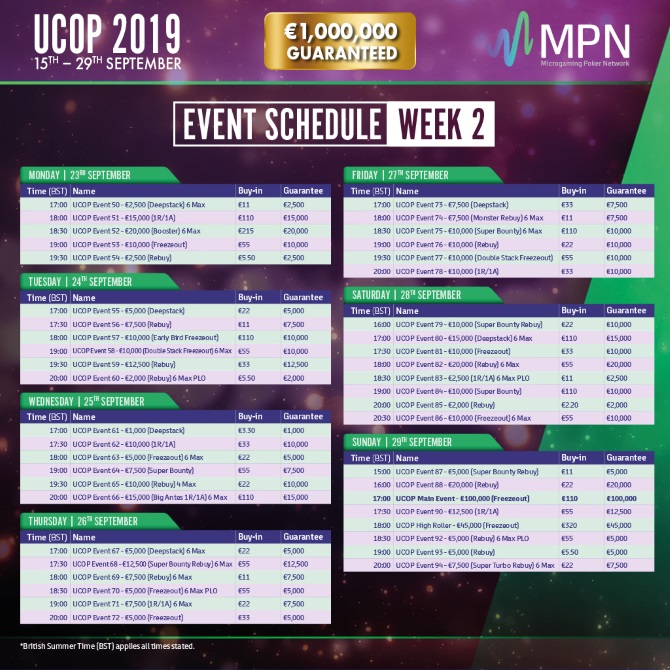 With buy-in starting at €2.20, the UCOP takes pride is providing tournaments for all types of players. But if you prefer not to entire tournaments directly, MPN will also be giving players the opportunity to qualify through direct feed and ticket satellites, which became available on September 1.

Find all available satellites for the UCOP in the lobby of the MPN poker room.

Perhaps the most sought after tournament of the series will be the €100,000 guaranteed €110-buy-in Main Event held on the last day of the schedule. MPN says that at least 150 €110 satellite seats will be awarded to the Main Event. According to MPN, 100 of those will be given away during the €22 Mega Feeder, held on the day of the Main Event at 14:30 BST.

Players will be able to win seats through Main Event satellites daily. A freeroll rebuy event will also be available each day at 18:15 BST.

UCOP Leaderboard adds to the pot

For frequent players of UCOP events, make sure to keep an eye on your position in the standings in the UCOP Leaderboard. Over the course of the 94 events, MPN will award the top 20 players with additional prizes totaling €20,000 as well as the coveted “Greatest Poker Player in the Universe” trophy.

Players Choice portions of the prizes (for the top 8 players) are avaiable based on winners preferences. Players must choose one of the following:

Although not directly part of the UCOP leaderboard, the 94 players who win one of the tournaments will be invited to the UCOP Tournament of Champions on October 6th at 19:00 BST with the top eight receiving online tournament tickets.

How are points earned towards the UCOP leaderboard?

UCOP Leaderboard position will be based on the position of the players who earn the FEWEST points during the 94 tournaments. It’s an unorthodox way to allocate points, but its kind of ingenious as well.

But there is a catch. If you don’t play in a given UCOP tournament, you will also be awarded points at a rate based on the number of entrants plus one. So if 254 people enter a tournament but you don’t enter, you will receive 255 points. To give players a break from playing all the tournaments, MPN will throw out your bottom 15 scores.

It all gets started on September 15. Start qualifying for events today. Don’t have an account on MPN yet? Join a poker room to get started today.