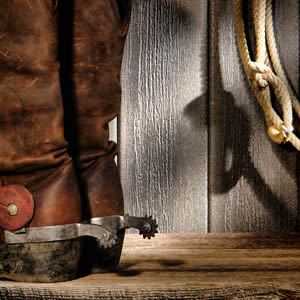 Even though they likely never worked on a ranch (or anywhere else for that matter) there has been no lack of poker players who have doffed Stetsons and other regalia of the old west over the years. Some like Amarillo Slim and Doyle Brunson were from Texas and raised in that culture, others like Chris Ferguson weren’t and dressed like cowboys to create a persona. But perhaps no poker player of the 20th century had more right to dress like a cowboy than Byron Wolford.

Wolford earned his nickname “Cowboy” not for his dress (which usually included a cowboy hat and patched denim overalls), but for his years on the rodeo circuit where he set records, won trophies, and of course honed his skills as a card player during the many hours of down time.

Wolford was born in 1930 and spent the first half of his life as a real cowboy, and eventual rodeo champion – Wolford won back-to-back titles at the Calgary Stampede and set a calf roping record in Madison Square Garden, dropping the calf in 11.03 seconds. The second half of his life was spent playing in and running poker games.

In 1960 he retired from rodeo competitions to focus on poker, and at the same time opened up his own card room in Dallas, known as the Redman’s Club.

Byron Wolford passed away in 2005 at the age of 73, leaving behind an amazing legacy in two separate arenas, rodeo and poker.

Cowboy Wolford played poker during an era where poker players toiled away in anonymity. The only way a poker player might become a known commodity in the 1970’s and 1980’s was by winning the World Series of Poker Main Event.

Wolford almost accomplished this feat in 1984, when he finished as the runner-up to Jack Keller in the WSOP Main Event. Had Wolford gone on to win he might have become an Amarillo Skim type of personality for poker, as both men had a knack for storytelling and lived interesting lives.

Fate decided differently and Cowboy Wolford finished as the bridesmaid to Keller in 1984, although Wolford’s exploits during the final table of the 1984 WSOP do hold a place in poker history.

Wolford’s 2nd place finish in the 1984 Main Event was overshadowed by how he found himself in position to battle Jack Keller for the WSOP title. Here’s what happened…

With three players remaining (Wolford, Keller, and Jesse Alto) it was Jesse Alto that was controlling the table, running over his two opponents while building a massive chip stack, and seemingly on his way to the WSOP title that had so far eluded him.

Nursing a dwindling stack Wolford decided enough was enough and pulled off what is considered one of the greatest bluffs in WSOP history.

On a flop of A-K-9 Wolford fired a 10k bet at the pot and was immediately called by Alto. A second King on the turn saw Wolford throw in a 40k bet. This time Alto thought for a bit before calling.

An insignificant deuce on the river saw Wolford shove all-in (for just over 100k) and Alto deliberate for a good five minutes before mucking. Based on the way the hand played out it’s likely Alto had a big Ace, which makes his ensuing tilt-fueled meltdown somewhat understandable when Wolford showed his hole cards, a 3 and a 5.

Alto went from closing in on poker immortality (he already had a 5th and a 2nd place finish in WSOP Main Events) to busted two hands later after shoving all-in blind twice in a row and losing both times to eventual champion Jack Keller.

I wouldn’t consider Cowboy Wolford one of the game’s greats, but he was a competent player who finished his career with an impressive resume.

In 1981 Cowboy Wolford won his WSOP bracelet, triumphing in the $5,000 Limit Holdem event.

The tournament would be the only major tournament Wolford won during his career, but he had a number of near misses, finishing 2nd or 3rd in five other WSOP tournaments, including the 1984 Main Event and the prestigious $10k No Limit 2-7 tournament in 1979.

When I first caught the poker bug one of my favorite columnists at the time was Cowboy Wolford. Wolford had plenty of stories from his years travelling the rodeo circuit and later from poker, and while they weren’t as incredible/unbelievable as those of Amarillo Slim Preston (because they were based on reality) Cowboy Wolford is someone you would certainly let ramble for a few hours as he spun his yarns.

Tales like the ones Cowboy Wolford penned for his book, Cowboys, Gamblers, and Hustlers, as well as for the online poker portal PokerPages.com, are absolute gold for poker historians and enthusiasts, detailing a part of poker lore that very few people even knew existed.