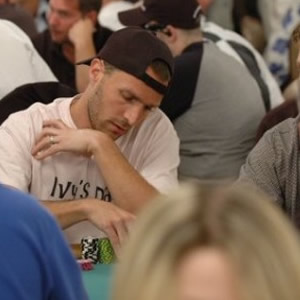 If you were already immersed in the poker world, the poker boom was a very strange time to be a professional poker player. It was a great time for sure, as there had never been such an influx of money into the poker economy, but at the same time it was also a bit cruel.

Stardom was arbitrary, and the best of the best all looking to really cash in, players who were once judged by their peers as either “getting it” or not getting it, found themselves at the mercy of tournament variance. The tight-knit poker community of 2002 who judged one another was replaced by what amounted to a popularity contest, opened up to millions of new poker players by the end of 2003.

This dynamic caused several players to go overlooked during the early Boom Years. One of those players was Paul Phillips, an entrepreneur turned poker player, who also happened to be a bit of a poker theoretician, and one of the first movers when it came to the potential of combining poker with the Internet.

Phillips’ name has been somewhat lost history, especially after he semi-retired from poker in 2005 to spend time with his family, although as you’ll see in a little bit, he may have also just been fed up with the poker world.

I’m of the belief that Phillips would have been far more appreciated, and would have been a terrific voice for players and the game in the modern poker world. Unfortunately, he was simply too abrasive and too challenging for the established Ole Boy’s Club’s tastes 10-15 years ago.

Paul “dot com” Phillips was one of the Internet poker wunderkinds before there were an Internet poker wunderkinds. He wrote the Boa web server while he was in college, and later Phillips was the CTO at Go2Net and worked on Scala and Typesafe – full disclosure, I have no idea what any of these things are, but they do have their own Wikipedia pages.

Phillips is also a longtime contributor on dozens of forums and messenger boards, was one of the first players with his own website, and was one of the most notable posters on Rec.Gambling.Poker back in the early 2000’s.

Phillips is a WPT Champion, winning the 2003 WPT Bellagio Five Diamond World Poker Classic, as well as finishing second in  the 2003 WPT Legends of Poker tournament. Phillips followed up his runner-up finish at the 2003 Legends of Poker with a 7th place showing in 2004 according to his Hendon Mob page.

Phillips also has four WSOP final tables on his resume, with a pair of runner-up finishes.

Not the most impressive resume, but consider that his tournament career only lasted about five years, in addition to Phillips all but skipping the WSOP in both 2002 and 2003 – more on this below. It would have been interesting to see what Phillips could have accomplished had he stuck with poker.

Phillips was a polarizing figure in poker.

Often outspoken on forums, and always willing to speak his mind. He was an odd mixture of Daniel Negreanu, Allen Kessler, and Daniel Colman – outspoken, opinionated, and willing to challenge what he perceived were injustices.

For instance, in 2005 Phillips openly questioned why several big name players were invited to play in the $2 million WSOP Tournament of Champions – Doyle Brunson, Johnny Chan, and Phil Hellmuth – a privilege that was supposed to be earned at the poker tables.

You can read what happened to cause the 2005 ToC controversy here (written by Daniel Negreanu), and you can read Phillips criticisms here. Phillips aggravation about this led to him becoming even more of a polarizing figure in poker, and him taking a lot of heat on the forums.

Perhaps the craziest series of events Phillips found himself entangled in occurred in 2001 when Phillips was life-banned from Binion’s Horseshoe for speaking out about who The Horseshoe considered tournament personnel. When it was divulged that everyone from cashiers to payroll managers would get a piece of the 3% taken out of the prize-pool for tournament personnel Phillips openly questioned these disbursements. Here is what Phillips said to the Las Vegas Review-Journal in April of 2001:

“The players have, at a minimum, been misled. When people hear that 3 percent of the prize pool has been withheld, they expect it to go to the dealers and tournament floor personnel.

If Binion’s wants to supplement the salaries of its employees, they should raise the entry fees rather than subtract from the prize pool.”

After the above comments found their way to the Behnen’s (the owners of Binion’s Horseshoe at the time) Phillips was forcibly removed from the property while playing in a cash game and told he was no longer welcome and “no-tresspassed.” However, the ban didn’t last very long, as he was reinstated a few weeks later, in time to participate in the 2001 WSOP Main Event.

Phillips played only one event in 2002 and skipped the WSOP in 2003 – which may have contributed to him being relatively overlooked during the Poker Boom. When he returned in 2004 he was playing great poker, but you could just see the fire wasn’t really there anymore.