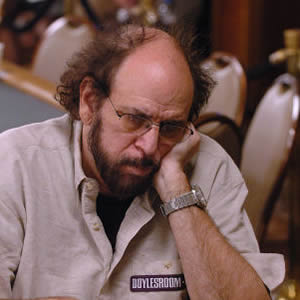 The current perception of Mike Caro is a somewhat crazy old man whose theories and strategies are long out of date. Mike Caro is the ultimate holdover from a poker age that is long extinct, and his name is often followed by derision and chortles.

As someone who came into the game before the Poker Boom this actually saddens me, and hopefully this column can clue some of you in as to why I think Mike Caro belongs in the Poker Hall of Fame.

If we travel back to the year 2000 you would have a difficult time avoiding the name Mike Caro no matter where you looked in the poker world.

In 2000, Caro was the face of the sole online poker room Planet Poker, one of the most sought after columnist in poker, the author of several well-known poker books including Caro’s Book of Poker Tells, he was widely regarded as one of the best draw poker players around, he was one of the first people to use computer simulations, and among the first to use the Internet to market and promote poker.

Known as “Crazy Mike” or “The Mad Genius” Caro’s game du jour was five card draw, a game that requires a lot of bluffing, a lot of meta-game, and perhaps more than any other form of poker, the ability to craft a table image.

Caro excelled on all of these fronts.

Caro’s crazy table image allowed him to appear far looser and more unpredictable than he really was, and his research into body language and poker tells not only allowed him to beat his opponents, but it led to one of the seminal poker books of all time: Caro’s Book of Poker Tells, as well as the still used mantra, “Strong means weak and weak means strong.”

When it comes to poker players Mike Caro could certainly hold his own — he was handpicked to write the Draw Poker section of Super System after all– but Caro’s real contributions to the game came in his tireless writing and theorizing about poker.

A lot of the theories Caro espoused over the years are looney tunes and have been proven wrong, and in many cases Mike Caro himself no longer adheres to these strategies, but more importantly, Caro was one of the few people who was willing to test conventional wisdom and test it in new ways, such as his use of computer simulations.

Quite frankly, if it wasn’t for Mike Caro’s willingness to test the bounds of poker strategy a lot of his theories wouldn’t have been debunked, and the current looser more aggressive style of play that has taken hold may have been delayed.

Would anyone have spent the mental energy on “schooling” and other Caroisms had he not presented them as viable strategies?

Mike Caro was the quintessential self-promoter. He was Phil Hellmuth before Phil Hellmuth, and before there was any money in it.

Virtually every one of Caro’s books contained his name in the title: Caro’s Book of Poker Tells, Caro’s Fundamental Secrets of Winning Poker, Caro’s Most Profitable Hold’em Advice, Caro on Gambling, and so on. Caro, Caro, Caro.

In addition to his books there were countless columns at Gambling Times and Poker Player Magazine, and now on his website Poker1.com.

Ahead of his time

As mentioned above, Caro was also one of the first people to use computers to test poker theories, and he was an early adopter and champion of the Internet and poker.

Caro unleashed Orac (told you he was a self promoter) on the world in 1984, the first attempt at an AI poker simulation –read that date again 1984!

Caro was also a rules guy, and worked with several poker rooms (including the Bicycle Casino) to create a universal and fair code of conduct. Caro also helped create the World Poker Finals at Foxwoods.

And for all you Internet kids that scoff at “The Mad Genius,” you should realize it was Caro who first introduced and advocated for a four-color deck.

And most importantly, it was Mike Caro who championed online poker way back in the 1990’s when virtually the entire world was skeptical of the idea. So before you go off dismissing him, stop and consider how much of a visionary this man was, and how much of a lasting impact he left on poker, especially online poker.

The online generation owes a lot to Mike Caro.