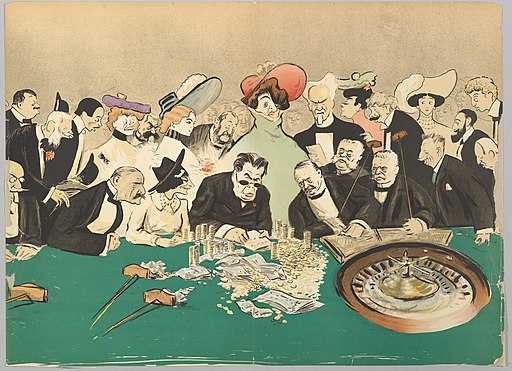 That red and black wheel is almost hypnotic, isn’t it? Casinos certainly wouldn’t be the same without it. Yes, it feels like that game has been around forever. But let’s face it, it hasn’t been around since the invention of the wheel. So let’s get down to business. What are roulette’s origins?

Where did roulette’s origins begin?

The steps to inventing roulette took a few interesting turns along the way. The first thing that happened was the invention of a wheel similar to the one we know of today.

It was created in 1600s France by a mathematician, Blaise Pascal, who wanted to design a perpetual motion machine.

Without this invention, roulette’s origins simply wouldn’t have its spinning off point.

In the next century, in and around the 1720s, there are reports of people using this wheel to gamble. Not to play roulette, but instead to play Biribi, which is an Italian game that shares some similarities to our game in question.

Roulette spins onto the scene

However, we do know that the game we know was played in the late 1700s in Paris. That’s all thanks to a 1796 book by Jacques Lablee, where a detailed description of the game is laid out. What’s the book called? La Roulette, of course.

The only main difference was that the zeros were red and black, as opposed to green like we’re used to today.

When roulette was first invented, it was played with a double zero wheel. It migrated to North America in that form and spread like wildfire. Extremely popular and everyone loved it. So why mess with a classic?

Well, nobody told the Blanc family in Bad Homburg, Germany to not mess with a classic. They decided to test out the single zero wheel and people went wild for it. This was in the 1800s, before a big crackdown would close down their operations in Germany in the 1860s.

But people were just so into roulette that when the Blanc family could no longer operate in Germany, they moved to Monte Carlo. And the European nobility came in their droves to visit the casinos and play that single roulette wheel too.

And to this day, the divide remains. In North America, people mainly play with double zeros. While over in Europe, people are loyal to the single zero wheel game. Interesting, isn’t it?

Inspired by roulette’s origins to spin the wheel yourself?

If you’re in the mood for spinning that red and black wheel after learning all about roulette’s origins, you’re in luck. Almost every online casino has roulette games on the go. But if you’re wondering where to go, we’d recommend bet365.

They’ve got a lot of different roulette tables to choose from to suit all types of budgets and playing styles. Plus, you can even get the thrill of streaming Live Roulette into your living room, as a real croupier brings you through your game.

And if you sign up today, you can take advantage of this bet365 bonus code.