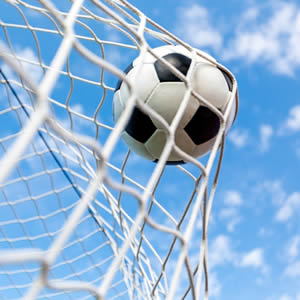 This week, No Deposit Poker has gone all Champions League themed and given that the premiere club competition in world football will discover the eight quarter-finalists over the next fortnight of football action, the timing could not be better.

While the likes of Chelsea, Real Madrid, Barcelona, Manchester City, Arsenal and Bayern Munich clamour for a place in the last eight, you could be enjoying a little added extra yourself thanks to two Champions League-linked promotions, one with Bet365 making a swift return after a two-week run in February.

First, let us take a look at how you could earn yourself a free bet of £25 with Sky Bet, simply for playing at Sky Casino over the next 9 days or so.

Just because the Champions League is being shown live on TV doesn’t mean that you have to miss out playing any of your favourite Sky Casino games. If you decide you’d like to catch a little extra 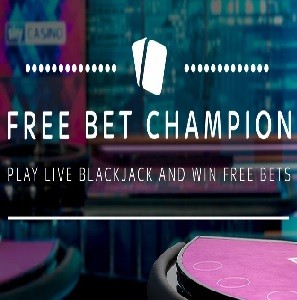 casino action while the football is under way over the next fortnight, then you could be the lucky recipient of a free bet of £25 with Sky Bet.

There’s no need to opt-in to this promotion, simply log into your Sky Casino account during any of the Champions League games on the 10th, 11th, 17th and 18th  of March (from 8pm to 11pm) over the next fortnight and log into the Live Blackjack game on Sky Casino.

Once logged in, simply play the game as you would normally however Sky Casino have added a little twist. In between the times stated above, each horseshoe of cards will have a few extra ‘golden ticket’ cards included randomly within the pack.

If you receive of these cards from the dealer, then you will be given a completely free £25 free bet to use on Sky Bet, credited to your account by 5pm the following day.

The only things to remember for this offer are that you can only be dealt one of these cards between 8pm and 11pm on the days of Champions League Round of 16 fixtures (those outlined above) and that this offer is only available on the Tuesdays and Wednesdays in the week when Champions League games are being played.

The good news is however, that you could be dealt up to four golden cards in any one session and you will receive a free £25 for each of them, though the maximum number of golden cards you can win is four.  That is a total of £100 worth of free bets potentially.

If you are not yet a member of Sky Casino and want to try and win yourself a free bet of £25, or participate in any of the other promotions, click here for the latest Sky Casino no deposit bonus deal. 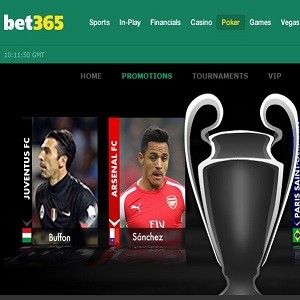 Don’t worry, you haven’t got an unusual sense of déjà vu; Bet365 Poker have decided that their flagship promotion for March will take on a very familiar theme. Last February, you may remember we announced Bet365 Poker were running their popular Team of Champions promotion once again, in conjunction with the return of the Champions League.

Well, with the second legs of the games due to be played over the next fortnight, the Team of Champions promotion has also made a return, just seven days after the last promotion officially ended!

So now seems a good time to recap what exactly this now familiar promotion entails and how you could be the beneficiary in two distinctly different ways.

The aim of the Team of Champions promotion is to build up a team of 11 players based on the top players performing in the Champions League, such as Juventus’ legendary Italian goalkeeper Gianluigi Buffon and Paris St Germain’s Brazilian centre-back Thiago Silva.

This is achieved by playing in any real cash poker game on the Bet365 website, including Sit & Go games, Twister Poker and multi table tournaments. Players earn one coin for every two merit points they earn through play on the site.

However, if you play at the Premium Tables, then you earn one coin for each merit point you earn, thus you’ll earn your coins and thus players for your team at a much faster rate.

The amount of coins you need to earn to trade in for a player card for your team starts off at just two in the group stage of the promotion, however that increases to 10 for the Round of 16, then 50 for the quarter finals, 200 for the semi and 500 coins per player for the final.

This new Team of Champions promotion runs from two weeks from the 9th March 2015 through until the 23rd March 2015, so you don’t have a huge amount of time to start earning your playing cards and realising the different bonuses available, plus a chance at a prize in any of the daily prize draws.

Click here for all the latest information about the new no deposit Bet365 bonus that is available if you would like to join the Bet365 Poker site and are not already a Bet365 member.