You have probably heard of a type of play called a Greek Tragedy, which is

essentially a play about a person who seemingly has it all, falls to some kind of disaster due to some flaw in their character or psychological make up. It was a form of play that was popular throughout ancient Greece and which brought to life many of the myths and legends of the civilisation.

Now the good news here is that modern slot games have gone back to some of the most enduring of these Greek-themed historical stories, myths and legends and come up with a number of slot games for you to try. And the good news is that as long as you approach the games sensibly and can afford to play with what you are betting with, there is absolutely no tragedy involved!

With that in mind, we scoured the pages of the popular casino site bet365 Games for some of the best Greek-themed slots available on the site and we have recorded that information for you below.

Click here to play any of these four great Greek slots at bet365 Games Now!

If you live in a part of the world where you do not yet have access to bet365 Games, such as Pennsylvania for example, you can instead access a wide range of slot games, casino games, poker rooms and sports betting options at a number of sites online. To get the latest information on the deals available, check out the latest playsugarhouse promo code from the link and see if you can land yourself a cracking deal to start playing on the site.

Let’s begin with a look at one of the simpler of the four games on offer, which is based on one of the most enduring of all Greek Myths, and was the subject of a film starring Brad Pitt around a decade ago.

Produced by High 5 Games, this is a rather unusual set up for a simple slot with 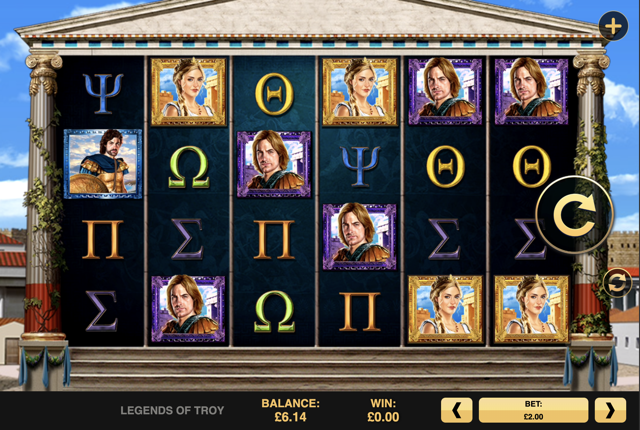 reels each with four symbols on and the game is based, of course, on the famous Trojan War, which pitted the Trojans against the Spartans after Paris of Troy took Helen, the most beautiful woman in the world, from her husband Menelaus.

There are 50 pay lines in play on the slot and spins start at 1.00 per game. Wins can range from 5 coins up to the maximum of 2,500 coins. To help you land a win with any of the ten standard symbols in the game, there is also a Wild symbol that can substitute for these symbols to create one or more winning lines.

Although an unusual set up, the Legends of Troy slot is deceptively simple to play and offers a nice mix of returns.

When it comes to the Gods of Olympus, there are three names that generally stand 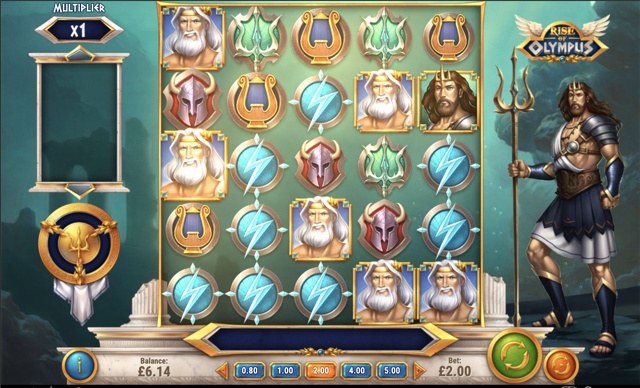 This is a 5×5 reel slot that doesn’t have the standard pay line set up. Instead, players win by landing groups of symbols together vertically and horizontally across the reels in clusters. The more symbols in a cluster, then the more valuable that win is. Once a win is achieved, the cluster pays out and disappears, allowing any symbols above it to drop down and potentially create additional wins from the same spin.

If you can clear the entire reel set of symbols on any given spin, then in addition to all your wins, you would also receive a bonus of 100x your bet.

Part of the attraction of the Rise of Olympus slot is its bonus features. The first is the Hand of God bonus, which can trigger at random on any spin that is not a winner. Here, one of the three gods will use their special power move to help you turn a non-winning spin into a winner. Hades turns one set of symbols on the reels into a different set, Poseidon adds two Wilds to the reels, while Zeus will remove two sets of symbols entirely from the reels to help you land win.

These bonus moves are also part of the Wrath of Olympus bonus which sees them triggered in turn with each successive trigger of the bonus. Lastly, you can also play a Free Spins bonus round, where each god has their own particular bonus, which sees you start with between 4 and 8 Free Spins but which allows you to earn more as you play through the bonus.

The aforementioned Zeus, Poseidon and Hades (amongst others) had a father 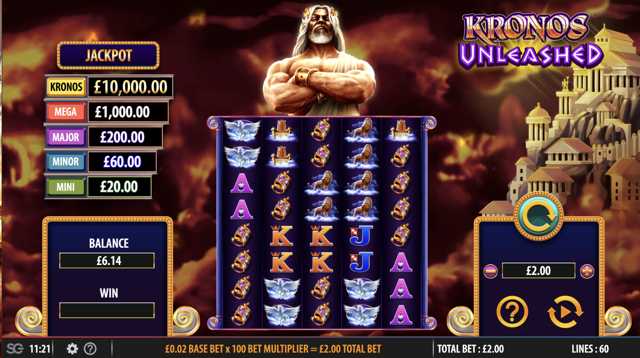 calledKronos and he was a bit of a tortured soul, who ate his children to avoid a prophecy that said they would usurp him as the ruler of the Kingdom.

This game is based on his unnerving legend and it is an unusual styled slot game that has five reels with eight symbols on each. Symbols are stacked up to four high to help allow for bigger value wins and there are of course Wild symbols on the reels to help you land a win.

The game boasts five jackpots ranging from 10x to 5,000x your bet and spins start at just £0.20 per spin, although you can ramp that up to £50 per spin if you are a higher roller. The slot comes with the chance to win both ways across the reels when a Wild is in play and of course, the obligatory Free Spins bonus round.

There is also the Lightning Respin feature when you land six of the Gold Kronos symbols on the first reel. When this happens, all other symbols are removed from the reels bar the Gold Kronos and Power Up symbols. You then have three Re-spins in which to add to those collected on your initial spin to increase the value of the win that you land.

The story of King Midas is brought to life in the Gold King slot game, a 5×3 reel slot 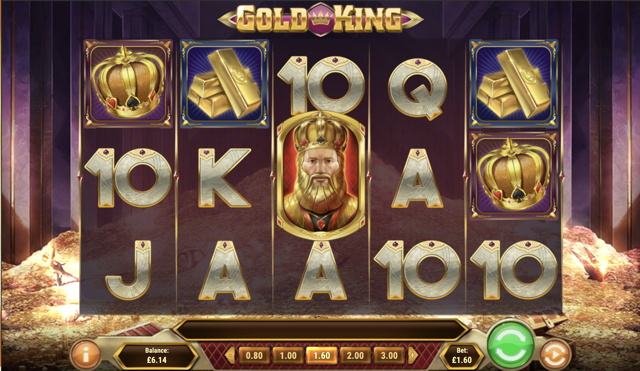 that offers 20 pay lines in play and which can be played from as little as £0.20 per spin, or as much as £100 per spin depending on the size of your bankroll.

As well as the standard set up on the reels, on each spin of the reels one symbol is randomly selected and this symbol is then given a stack of 12 symbols high on each reel. This allows you a chance to land this symbol across all five reels and of triggering a much higher value win.

Land a randomly selected Golden Spin and you can also win big. That’s because a Golden Spin sees the first, third and fifth reels all turn into the same symbol and are then held on the reel while the second and fourth reels are respun. If you can land the same symbol as on the other reels, you are guaranteed a win and the more symbols you land, the bigger that win can be.

With so many great Greek slots to play, and many more we have not mentioned, you can always be sure that bet365 Games offers you a fine selection of slots, whatever the subject.